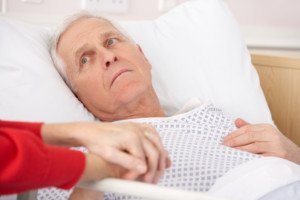 The overall 10-year survival rate of esophageal cancer is one of the bleakest of all cancers.

This is because the disease is almost always diagnosed at an advanced stage.

Furthermore, there is no screening method for the general population, as there is for some other cancers such as that of the breast, cervix and skin.

There is a YouTube video of a woman describing her symptoms of esophageal cancer.

One of its comments is by a woman who explains that her husband is a 10-year survivor of metastatic esophageal cancer.

Reading this can give hope to anybody who’s diagnosed with this disease or who has a diagnosed family member.

“Surviving” cancer generally refers to showing no evidence of disease at the five-year mark — or, to put this another way, simply still being alive five and especially 10 years after diagnosis, regardless of remission or multiple recurrences.

A major milestone in surviving cancer is that of being alive 10 years out, especially if there’s no evidence of disease.

The woman’s message is that there’s always hope.

The reality is that when it comes to esophageal cancer, there essentially is no hope.

“Actually, 10-year survival is rarely discussed because, despite the very lucky and unusual man who survived 10 years, that is — sadly — unusual,” says Alex Little, MD, a thoracic surgeon with a special interest in esophageal and lung cancer, and clinical professor at the University of Arizona.

Dr. Little explains, “The 10-year survival rate for all patients with esophageal cancer is close to zero.

“Of course, that can vary, and the few whose cancer is in stage 1 [tumor still localized] will do better.

“This is also true for those who come through neoadjuvant therapy [shrinking the tumor prior to surgery] and an operation, but even for them we look at three- and five-year survival as an excellent result.”

Below is a pie chart (NCI Surveillance and Epidemiological End Results) showing the percentage of patients diagnosed at stages 1, 2, 3 and 4 for esophageal cancer. 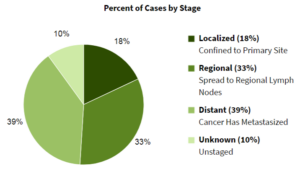 Below are the survival rates for all stages of esophageal cancer. 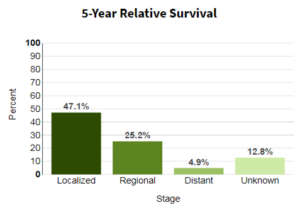 When you consider that only 18% are diagnosed at the local stage, and that only 47% of stage 1 patients are alive after five years, this helps explain why the 10-year survival rate of this disease is so abominably low.

Lowering the Risk of Esophageal Cancer

Some measures can go a long way if they’ve been clearly proven to be risk factors.

#5    If you’re having GI symptoms, inquire about an upper endoscopy. This will detect Barrett’s esophagus.

Though Barrett’s does not cause symptoms, the cause of Barrett’s (chronic acid reflux) usually results in marked symptoms.

Barrett’s is a pre-malignant condition that can eventually morph into esophageal cancer.

For those with Barrett’s, scheduled upper endoscopies can monitor for any changes in cellular structure and the possibility of a needed surgical intervention.

Here is the link to the video of the young woman describing her esophageal cancer symptoms.