Can an Esophageal Cancer Symptom Go Away for a Few Weeks? 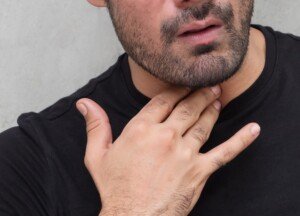 If a symptom that’s suspicious for esophageal cancer has now been gone for a few weeks, does this mean you don’t have cancer after all?

Or is it possible the disease can sometimes cause a symptom to seemingly disappear for a short while?

People who fear a cancer often reassure themselves, “It can’t be cancer because the symptom has gone away — and the symptoms of cancer wouldn’t just go away because the tumor would still always be there.”

This type of reasoning isn’t all that off-base, because a tumor would remain in place.

Well … don’t be so quick to make this assumption, even for esophageal cancer.

A woman, 34, posted a YouTube video describing her esophageal cancer symptoms, including how the disease first presented itself.

She said it then went away for a few weeks, and this reassured her it was nothing serious.

However, after that two or three week respite, a new symptom surfaced: difficulty swallowing. This is called dysphagia.

The symptom of pain never came back.

But the symptom of difficulty swallowing never went away – and only grew worse.

So let’s go back to the question: Can an esophageal cancer symptom disappear for a few weeks?

“Your question is based on a patient whose first symptom was odynophagia, which apparently resolved only to be followed by dysphagia after a few weeks,” begins Alex Little, MD, a thoracic surgeon with a special interest in esophageal and lung cancer, and clinical professor at the University of Arizona.

“The cause of pain is uncertain,” continues Dr. Little.

“It may be irritation of an ulcerated carcinoma [cancer].

“Ulcers are more common with squamous than adenocarcinoma, or due to either distension of or a strong contraction of the esophagus above an obstructing tumor.”

What about difficulty with swallowing that goes away?

Dr. Little explains, “Many patients begin to switch their diet toward softer foods as difficulty swallowing begins and progresses.”

They may not be fully aware they’re doing this; the switch may occur on a subconscious level, such as desiring apple sauce over apples, and mashed potatoes over boiled potatoes, and no longer eating steak.

“This makes it easier to swallow, so it seems to them their dysphagia is lessening,” continues Dr. Little.

If you’ve recently had difficulty swallowing – but it seems to have disappeared – it’s vital that you ask yourself if you’ve switched to softer foods – and only after that has the symptom resolved?

If this describes your experience, you need to see a doctor. Do NOT put this off.

Pain that Goes Away

“This might also be the case for odynophagia,” says Dr. Little.

“The esophagus would be less irritated by softer and blander foods which would pass easier and not incite an esophageal spasm to force them through the tumor.”

If your symptom has gone away – only after your diet has changed to softer foods, perhaps you can revisit your old diet and see what happens.

Non-malignant conditions (e.g., acid reflux, ulcer, hiatus hernia) can cause a sensation of difficulty swallowing food, and/or pain while — or a few moments after — swallowing food.

But rather than wait around with your fingers crossed while you start eating a brownie instead of pudding to see if your symptom returns, you really need to make an appointment with a gastroenterologist.

Here is the link to the video in which a young woman describes her esophageal cancer symptoms.