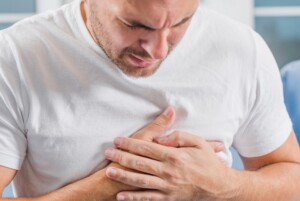 Here is a detailed comparison by a surgeon between trouble swallowing from esophageal cancer compared to ALS.

If a person’s health anxiety is tuned more into esophageal cancer, he or she might start suspecting this disease as the reason they’ve been having difficulty swallowing, rather than a neurodegenerative condition.

“First, swallowing is a process that starts in the mouth; progresses when the tongue and oropharynx coordinate to propel food from the mouth and into the esophagus,” explains Alex Little, MD, a thoracic surgeon with a special interest in esophageal and lung cancer, and clinical professor at the University of Arizona.

“The esophagus then has to propel the food bolus through the esophagus with peristaltic—sequential—muscular contractions, ultimately pushing it into the stomach,” continues Dr. Little.

The medical term for difficulty swallowing is called dysphagia.

“ALS is a condition of weak muscles, so patients with this disorder have trouble with what is called the oral phase of swallowing,” says Dr. Little.

When the muscles are atrophied enough from ALS, the patient can no longer take food by mouth.

• The ability to chew is impaired.

• The muscles that push food into the esophagus no longer work.

• At this stage, food will not get into the esophagus – not even applesauce.

“So, patients report they have no difficulty getting food from their mouth into the esophagus—the oral phase of swallowing—but the food hits a roadblock on the way down the esophagus.”

In other words, esophageal cancer doesn’t affect the oral phase of swallowing.

The symptom of dysphagia or “trouble swallowing” shows up on symptom lists for both esophageal cancer and ALS (bulbar onset).

Dr. Little explains, “Both ALS and esophageal cancer patients have dysphagia, but for different reasons and during different phases of the swallowing process.”

In esophageal cancer, “Some [food] may get through initially, but eventually nothing passes, and the patient has to vomit everything back up.”

Key Differences Between the Dysphagia of ALS and Esophageal Cancer

• With bulbar-onset disease, there will be other symptoms such as difficulty using the tongue, worm-like undulations of the tongue, slurred speech, strained speech, alteration in speaking pitch, hoarseness and buildup of saliva.

• With bulbar-onset, the trouble swallowing will feel like it’s coming from the throat. There will not be any chest- or neck-area symptoms caused by this.

• “Their dysphagia is difficulty clearing their mouth,” says Dr. Little.

• The feeling of dysphagia will also be present every time the patient swallows throughout the day to clear saliva.

• “EC patients have a ‘plug’ in their esophagus,” says Dr. Little. “They have no difficulty clearing their mouth.

“But food in the esophagus meets with difficulty passing the obstruction. Their oral phase is okay. Their dysphagia is during the esophageal phase of swallowing.”

• This means the symptoms of “swallowing” that the patient feels will be at neck level, rather than in the mouth or throat somewhere.

• However, esophageal cancer can cause pain in the throat, whereas ALS won’t.

• “The medical definition of swallowing includes the passage of food through the esophagus and into the stomach — and it’s during that phase that the EC patients have dysphagia.”

• Thus, the patient will feel a stuck feeling of food behind the chest or sternum, and/or in the neck where the esophagus begins.

• Another symptom is burning, pain or pressure in the chest, including when not eating.

“In fact, many of my patients — when asked — would say they had no trouble swallowing — by which they meant they could empty their mouths without any difficulty.

“But when asked what happened next, they would say the food sticks or it won’t pass through. This is dysphagia.”

Do you have true dysphagia?

Most causes of what seems to be a problem with swallowing are benign. One is laryngopharyngeal reflux disease (LPR).

LPR does not actually prevent food from clearing the throat and being propelled down the esophagus to the stomach. But it can cause dysphagia.

Anxiety is another cause. This is why when a person is chewing and swallowing right at the moment they receive shocking news or see something shocking, they might gag, cough and involuntarily spit out their food (or drink).

But once the alarming moment has passed, there’s no problem clearing the mouth and getting food into the stomach.

A sensation of difficulty swallowing may be present on and off throughout the day, regardless of eating, for someone suffering from LPR or intense anxiety.

If you’re being ravaged by the fear of esophageal cancer or ALS every time you eat, the anxiety WILL make swallowing seem impaired.

Diagnosis Yearly in the U.S.

SEE A DOCTOR if you have other worrisome symptoms or if symptoms are getting worse.