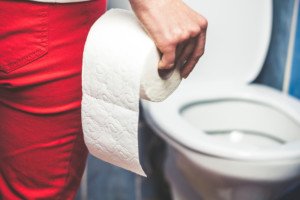 If your thin or narrow stools have you fearing colon cancer, there are other causes of narrow thin stools besides cancer of the colon.

“Alterations in stool consistency and a resultant ‘change in bowel habits’ are known symptoms of a number of disease processes such as inflammatory bowel disease, cancer, and irritable bowel syndrome.”

And the possible causes of narrow or thin stools don’t stop there.

Have you increased your fiber intake lately?

This can cause BMs to come out thinner than usual.

Have you been eating Olestra or anything with sorbitol?

Your BMs may even be on the narrow side on a normal basis, and you’ve only noticed recently because perhaps you read an article on colon cancer. 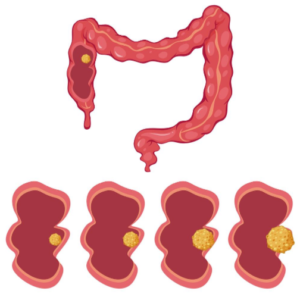 Dr. Jones stresses that what’s particularly important is whether or not narrow, thin stools are outside the norm for your typical BM appearance.

Don’t delay discussing any change in bowel habits with a gastroenterologist.

Though narrow, thin stools can result from colon cancer, this does not mean that if you have skinny BMs, you probably have colon cancer.

It’s actually most likely from a condition other than colon cancer. This includes diverticulitis.

In fact, it might even be from microscopic colitis, which I’ve had.

One day a very long BM came out and it was on the narrow side, more narrow than usual, but not what I’d consider as thin as or like a pencil.

What made the stool appear more narrow than usual, however, was perhaps its very long length.

I imagined it being segmented, and realized that if broken into thirds or fourths, it wouldn’t seem as “narrow.”

It just so happened that this particular BM didn’t break up upon hitting the water.

Dr. Jones explains, “Regarding the caliber of stool and its correlation with the presence of left sided colon cancer, the data currently available does not necessarily indicate that narrow stools should alert patients or physicians of a possible malignant process.

“The notion that left sided colon cancer or rectal cancer often presents with narrow stools is based upon the anecdotal opinion of expert physicians of the late 19th/early 20th century.”

“This conception has been propagated throughout the medical literature mostly based on tradition.” 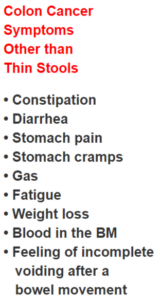 Most early colon cancer presents with no symptoms.

This is why there’s the extreme importance of getting screened for this killer with a colonoscopy.

This should begin at age 45 for people at average risk (due to age) for the disease, and then done every 10 years, unless otherwise indicated by the physician.

Dr. Jones’ practice interests include prevention and treatment of colon cancers, pancreatic disease and biliary disease. He has authored numerous scientific articles, reviews and abstracts and presented at a variety of national and international scientific meetings.

Appearance of Pencil Stools of Colon Cancer Compared to IBS