Strength Train One Inch at a Time to Burn Stubborn Fat 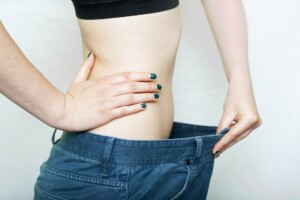 The technique of inch reps when strength training will help burn stubborn fat.

Areas where hard-to-burn fat tends to accumulate are the upper thighs, waist, stomach and lower abdomen.

You do not have to accept this stubborn fat as a lifelong problem.

Increasing the intensity of your strength training is one way to boost the fat burning process.

The extra boost will affect overall bodyfat, rather than any “spot reductions.”

You’ll want to apply this technique to compound exercises rather than single-joint exercises such as biceps curls, triceps extensions and side dumbbell lifts.

However, do not do inch reps with the deadlift or back squat. It’s risky and also not necessary to fire up the fat burning process.

Safer versions of squats, such as holding weights at your chest or shoulders, or using a Smith machine, are acceptable for inch repetitions.

Using the lat pull-down for an example, do 10 normal reps. On the next rep, bring the bar to the middle of the range of motion, then hold it there for 10 seconds.. 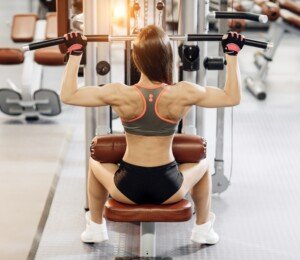 It’s all about buildup of the metabolic byproducts, so the “burn” that you feel is your feedback tool.

You can even hold the resistance at the midpoint for 20 seconds.

This increased time under tension will boost the burning of stubborn fat cells.

Repeat this technique for the 12th rep.

When you’re done, you should not feel as though you can do a 13th repetition.

If you do, this means you need to increase the weight load.

A variation is to hold the midpoint for ALL of the 10 sets for three seconds.

Inch Reps for the Entire Range of Motion

Another similar approach is “stop and go reps,” where the weight is slowly lifted and lowered just one inch at a time, holding and squeezing in each location for two seconds. 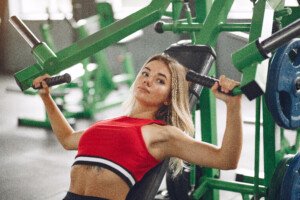 Using the incline press as an example, press the barbell or the machine’s handles one inch, hold a second, then another inch higher, hold for a second, until you reach the top of the movement.

For the negative or releasing phase, lower one inch at a time.

You will not be able to apply this technique with the same weight load you normally use.

However, the inch rep technique should NOT be done for every single set, either.

Simply do it for one or two sets per compound exercise, and see if you’ve lost any stubborn pounds after 45 days.

The scale may not show much of a change, but your clothes should be looser.

Inch reps and holds are crazy hard to do (much of it is mental) and even with light weight can elicit a growth response of lean muscle.

There are many other variations of holding reps, but all of them do force the muscle to “clamp down” on the blood vessels, leading to metabolic byproducts building up.

With the pulsing technique, the weight load is bounced back and forth slowly in a very narrow rep range of only a few inches.

There is a contraction and a relaxation of the muscle, but not a full pumping action. This intensity technique slows release of blood from the area.

However, there’s something very important you must know before you begin the pulsing technique.

This technique needs to be done at the bottom of the movement rather than at the top.

It can also be done in the middle. In fact, any point between the bottom and midpoint of the range of motion will do.

But if you perform pulses at the TOP of the movement, the exercise will be pretty much worthless. Very worthless.

Inch reps are great as starters to a set or as finishers as well.