Should You Punish Your Child for Being a Bully? 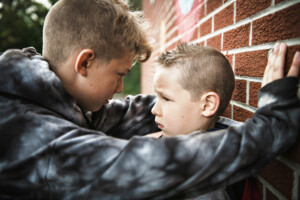 If you just learned your child has been bullying a classmate, should you punish him or her?

If so, what kind of punishment? Should you give him a taste of his own medicine?

There is the case of a man who learned that his grade school son was calling a neighborhood boy (who was older but very awkward) a “retard.”

The victim reported this to the boy’s father. The infuriated father didn’t use corporal punishment and didn’t even ground his son, but scolded him, which included exclaiming, “YOU’RE retarded!”

The boy never called the older kid “retard” again. But…does the correction of the problem justify how it was corrected?

I’d be lying if I said I’ve never done some bullying myself as a child.

My parents never found out about my verbal bullying — which meant it went unpunished — but it also went away on its own.

It’s a tough spot for parents when they learn their son or daughter is a bully.

Do you become inflamed, such as the father above?

His “solution” worked, but did it teach his son empathy or kindness? No sir. It taught him to be fearful of Dad — including refusing to approach him for guidance later in life.

You might be thinking, But for sure, that little brat won’t ever call anybody nasty names again.

However, the tongue-lashing from the father is a repeat of the child’s own bullying behavior, and teaches the bully absolutely nothing about kindness and respect!

Punishment Is Often no More than the Parent’s Anger 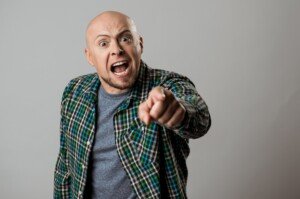 Well of course! A parent shoudn’t exactly be thrilled his or her child is a bully.

But you must also look at the big picture, the course you’re setting, rather than that snapshot in time when your blood is boiling.

“I do not believe that punishment is ever an effective way to teach children good behavior,” says Jessie Klein, PhD, MSW, assistant professor of sociology/criminal justice at Adelphi University, and author of “The Bully Society: School Shootings, and the Crisis of Bullying in America’s Schools.”

This doesn’t mean the parent shouldn’t feel furious. Sometimes, though, the parent does what’s easiest for them: a reactive tongue-lashing, or the less volatile confiscation of a prized possession.

Dr. Klein says that such responses “are of little use and do not help to teach empathy.

“Punishment conveys that retaliation is appropriate and right. It does not help students learn compassionate behavior.

“It teaches them the opposite  —  and it tends to incite rage and resistance.”

Imagine Being a Kid Again

How is being called a disparaging name by your own father going to make you feel basic respect towards other humans?

I know a woman whose kids are grown. She once said that, while they were growing up, if she ever found out they were being cruel to other kids, she’d “nail them to the wall.”

Sure, that may sound appropriate to the bully victim’s parents.

I myself would love to nail a bully — to any of my loved-ones — to the wall.

But the victim’s parents aren’t raising the bully child. Their perspective of wanting to hang the bully upside down doesn’t count.

If your daughter is a “mean girl,” being mean to her as punishment won’t turn her into a nice girl.

It will not make your bully of a son a nice guy.

Instead, harsh punishment or berating will only make many of these young bullies try harder not to get caught the next time, or figure out a different, sneakier way to be nasty like slipping salt in the classmate’s milk!

“They need support, and caring adults who can guide them in ways that promote fulfilling connections and a sense of responsibility to their community. Punishment is unlikely to fulfill these essential goals.”

Dr. Klein points out that helping the bully to do something kind for their target would be far more effective than making him or her clean the gutter as punishment or taking away the computer.

Look in the Mirror

If your child is a bully, ask yourself if maybe something you’ve done has contributed to this.

The father of the boy above had a habit of putting negative labels on his son. It’s no wonder the boy one day called another boy a bad name.

How often does your child witness you humiliate or intimidate other adults for seemingly no good reason?

Okay, if your neighbor is a real a-hole and you want to give him a piece of your mind, at least consider the possibility that your child may witness the exchange and mimic your behavior at school.