Child Accused of Bullying? What Parents Should Know 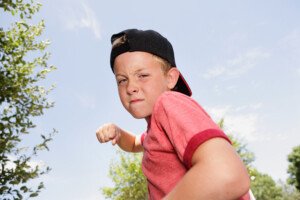 The stereotypical reaction of a parent, when they learn their child/teen has been bullying another individual, is to deny their child’s behavior or make excuses for it.

And often, this is the case, but another scenario also often plays out:

The parent/s lambast their child or teen, and actually behave towards them in a way that’s similar to how the child bullies at school!

I once heard a woman, whose kids were grown, announce, “If my kids were ever bullies, I’d nail them to the wall!”

A man I once knew berated his son and said, “You’re the duncehead!” after he learned his son called a neighborhood boy “duncehead.” The apple doesn’t fall far from the tree.

Tips for how parents should respond upon learning child is a bully:

“If a child is accused of bullying, the first step is to take the accusation seriously,” says Rashmi Shetgiri, MD, MSHS, medical director at Pediatric Primary Care Clinic in Los Angeles whose research interests include bullying and youth violence prevention.

“It is important to talk with the child and, if possible, the accuser or school to ascertain all perspectives on the situation.”

Did that man ever inquire why his son called the boy “duncehead”? Perhaps the boy had threatened his son.

Perhaps the boy pushed the son to the ground. The son was too scared to explain why, and he was never asked why, either.

It’s possible the boy simply felt like taunting the other kid. This warrants a talk between son and father.

But the “talk” should not be one-sided or of a berating, demeaning tone  —  this parent-to-child dynamic often causes the child to be a bully at school  —  or a victim of bullies.

“After determining what happened, parents can talk to their child about the intentions behind his/her actions,” explains Dr. Shetgiri.

“Some children who bully may not realize the impact of their actions, or may be bullying as a result of peer pressure.”

Parents should not harangue their kids for submitting to the peer pressure to be mean, though it’s understandable when an adult simply cannot figure out how a child, especially an older child, could allow themselves to be swayed to the dark side.

Parents are capable of this very behavior  —  a mob mentality of becoming mean-spirited because their peers are doing so.

Look no further than youth baseball or soccer games, where parents have been known to explode in temper tantrums and holler obscenities to coaches and umpires.

If you find out your child is a bully, you can “then discuss and model respectful interactions with peers, and set expectations” for your son or daughter’s behavior, says Dr. Shetgiri.

“Finally, parents can periodically communicate with schools to determine if the situation is improving, and can consider having their child speak with their school counselor or a psychologist to evaluate for any mental health or behavioral concerns that may be contributing to their bullying behavior.”

Dr. Shetgiri also suggests that parents bring up the situation with the child’s doctor to see whether or not a mental health referral is warranted.

Dr. Shetgiri is particularly interested in prevention of violence among Latino youth, the implementation of primary-care-based bullying and violence prevention strategies, and health outcomes for children exposed to violence and abuse.