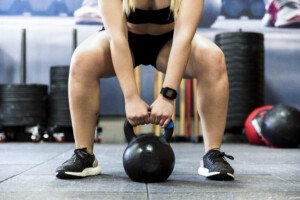 It’s time to ditch that tiny kettlebell for a 50 pounder and do some REAL swinging to strengthen your back to a whole new level.

There’s no rule in the exercise science world that proclaims that kettlebell swings should be done with a weight light enough for 30 repetitions.

In fact, a strong person can easily do 20 swings with a 50 pound kettlebell. The issue with 20 reps will be more of a matter of endurance than brute strength.

Many gyms have 50 pound kettlebells. These implements will have their weight imprinted in kilograms, and some models also show it in pounds.

Typically, the closet equivalent to 50 pounds is the 24 kg kettlebell, which is actually 52.9 pounds.

For purposes of this article, I’ll refer to the implement of choice as a “50 pound kettlebell.”

Most people who do KB swings use much lighter weights, and often for reps exceeding 20.

Or, if the reps are between, say, 10 and 20, the weight is too light to invoke much fatigue.

To test this observation, watch the next person you see doing KB swings AFTER they’re done.

Usually they will look as though they could have used a heavier weight and/or done many more reps. When you’re toast from a strenuous set, it shows.

The KB swing is a very effective compound exercise, quite unique from other compound movements that recruit the back musculature.

The arms at the top point of the swing don’t have to go all the way up (KB over the head) in order for swings to be very effective.

They need only go to parallel to the floor.

Though high-rep swings are commonly done and have their virtues, this exercise can also effectively be treated like any of the other major compound moves, such as the deadlift, bent-over row, chin-up, squat and seated cable row.

Benefits of Swinging a 50 Pound Kettlebell

Heavy KB swings are a really great multi-joint exercise which can be done on your back or leg days.

Heavy swings with a kettlebell don’t mean that you must give up your lighter routines. But certainly, you should consider adding them in.

The benefit is that this will be one more way to strengthen the posterior chain — and in a way that the deadlift, lat pull-down and row will not do.

The movement also has carryover to the tasks of daily living. One example is that of shoveling snow.

The action of snow shoveling has a similarity to swinging a KB.

The start position of shoveling snow is similar, with that slight squat. The arms then are extended and raise a weighted shovel.

The “swinging” aspect is when you toss the snow off to the side.

Your lower back acts as a pivotal point, very close to what it does when swinging a KB, as you shovel, lift, toss and then return to the shoveling.

How many reps with a 50 pound kettlebell?

The goal is 12 to 20 reps. If you can do 20 with excellent form and full range of motion, then use a heavier weight and reset to between 12 and 20.

If you’re not trained enough to effectively use the 50-pounder, use a lighter weight, but one for which 12-20 reps leave you heavily panting.

Why not a lower rep max?

If you’re using a weight for which you truly cannot do more than 10, let alone six or seven, reps, there will be a strong possibility that early on you’ll have form breaks.

At least that’s what I’ve found with my swings. A lower rep max with maximal weight in the KB swing just feels awkward.

It’s not the same as lower rep maxes with more traditional compound lifts such as the deadlift, lat pull-down, bench press and shoulder press.

Furthermore, the 12-20 rep range, done with maximal weight or even near-maximal weight, will produce a serious cardiovascular training effect similar to a HIIT interval.

This is why, at the end of the set (a true rep max now), you’ll be panting hard! 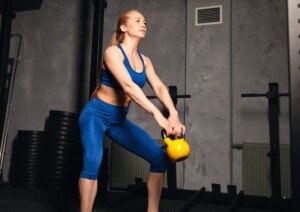 Feet should be shoulder width or wider apart, and should be in full contact with the floor at all times; no going up on the balls of the feet as the weight gets lifted.

The movement should involve a quarter squat — going to parallel thighs is not necessary.

The back should remain fairly upright. This protects the low back from potential overload strain from excessive hinging.

Keep your lower back arched; do not let it round. 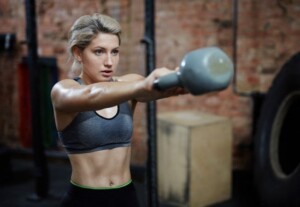 It’s not necessary to try to get the device as far behind you as possible when moving it between your legs.

You should definitely break the plane created by your legs, but trying to get it through as far as possible will promote excessive low-back rocking or possibly too much of a forward lean.

As the weight is lifted up, exhale, then inhale as it’s lowered. When the weight is up at its highest point (arms parallel to the floor), make sure your wrists do not get floppy and flexed. In other words, don’t let your hands droop.

As the set progresses, you may become too winded to breathe as instructed, and instead will begin to pant faster than the reps are being executed.

However, you should still try to exhale as much as possible during the lifting (concentric) phases and inhale during the releases.

The goal is make the set truly strenuous. You’ll need to begin feeling fatigue bearing down before the set is over.

Don’t tense and hunch up your shoulders. If it’s impossible to avoid this, the weight is too heavy.

A person who’s been faithfully doing deadlifts, rows, pull-ups, etc., but has never done KB swings, will need to start with a relatively light weight.

Don’t jump right in with a big kettlebell, as this can result in very sore back muscle the next day.

A deconditioned person who’s new to strength training will rapidly fatigue with just a 10 pounder.

Furthermore, their progression up the ranks of resistance will take a lot longer than the trained individual who’s never done KB swings before.