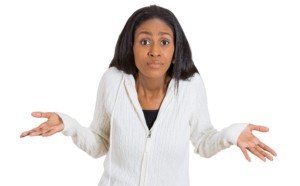 Have you ever seen people moving the handles only two inches on strength training equipment and wonder, “What the heck are they hoping to achieve?”

Once again, I spotted a woman doing this. I finally decided to write about it, focusing on how worthless this practice is, rather than how ridiculous it looks.

• The range of motion is literally about two inches. This is easy for anyone nearby to observe.

• Every person I’ve ever seen doing this never appeared to be younger than 45.

• This phenomenon occurs on pressing and pulling upper-body equipment as well as leg equipment.

Why do these people move the weight stacks only a few inches instead of the entire (or even 50 percent) range of motion?

There are different ways to manipulate range of motion when strength training.

For example, there are static contractions: holding the resistance at some point for a few moments during a full-range repetition.

There is also the partial-rep technique, in which – using the shoulder press example – a person pushes up from the bottom of the movement to only 75 percent or even to just the midpoint, and then lowers, and repeats all the reps this way.

I myself employ partial reps for some of my leg pressing, in that I start from a deep position and push out only halfway or a bit more and hold for several seconds (a combination of partial reps and static contractions) before releasing back to the deep starting position.

However, the worthless approach that’s the subject of this article is when there is very limited range of motion: only a few inches — occurring as follows:

• However, I’ve witnessed the two-inch range-of-motion occur at the “top” of pulling/rowing motions – meaning, with arms straight out in front or straight above (horizontal row or pull-down) the person pulls the handle towards herself only a few inches for each repetition.

• For the leg extension, the person typically works from the extended position, “lifting” only a few inches for each rep.

• For leg curls, the location of the movement is when the legs are extended.

• For the leg press, it’s always when the legs are fully extended. And no, I don’t mean calf raises using the balls of the feet. I mean actual leg presses with a ROM of only a few inches.

Though this suggests knee arthritis, this theory sinks when you consider that the individual will do micro-reps for all upper-body exercises, too!

Why do they do this?

In fact, they don’t even prevent full or near-full ROM for pressing and overhead movements. The issue isn’t range of motion; it’s amount of resistance. The exception is frozen shoulder syndrome.

But…if it does hurt to complete the ROM, then the solution is to use very light weight, even if that means just 15 pounds on a machine.

If this still hurts, then that person should either avoid the machine, or try a 50 percent ROM at the lightest weight.

Furthermore, if it hurts to lift the handles all the way overhead, why would these people do this and then hold their hands overhead for all those tiny little two-inch repetitions?

Seems to me that any shoulder pain would prevent maintaining this overhead positioning.

In short, what I’ve observed does NOT fit the bill for someone with shoulder pain, especially since they do the micro-reps with pulling, rowing and leg exercises.

Further supporting this observation is that these men and women don’t even use the lightest weight (the first bar of the weight stack). They usually have the pin at the third or fourth bar.

Well, if this is an excuse for some, at least they admit it. But they need to realize that a two-inch ROM won’t cut it.

A range of motion of a few inches does not mimic the activities of daily living. The only way it ever can is if you’re trying to position objects on a high shelf, requiring a sustained overhead position of your arms.

But I highly doubt this is what these folks are training for.

In day-to-day living, we use our upper body in full range of motion. This is why, when strength training, we should employ full ROM for at least most of the exercises.

“At Least It’s Better than Nothing.”

Comparing your routine to “nothing” is an extremely low standard of reference. If you must use a very low standard of comparison, then this alone should tell you how pointless the two-inch ROM is.

“I Do It for only Some Exercises, not All of Them.”

Actually, when I observe these people, they do it for all. This phenomenon is not to be equated with individuals who do full ROM for most sets, but then as they increase the resistance, can only do micro-reps.

This latter group has already completed sets of full ROM. They then start piling on the weights (leg press) or move the pin further and further down the stack, and because the resistance is so heavy, they can only press or pull a few inches.

But when I witness the true micro-reppers, they have the resistance set so light TO BEGIN WITH, that they have no problem pressing the handles out all the way, or up over their head all the way, or pulling them towards their chest all the way, to get into position for a bunch of meaningless micro-repetitions.

Work around the injury. Again, I’ve had rotator cuff issues, and I was still able to perform full ROM at very heavy resistance for all pulling and rowing movements.

For chest and shoulder exercises, I performed full ROM at very light resistance while the rotator cuff issue gradually healed.

If I was not able to lift even the lightest resistance overhead, I avoided the machine.

Chest motions are notorious for aggravating rotator cuff problems, and in fact, partial reps at the top of the movement (arms extended and then releasing only halfway) are often done to get in some degree of chest exercise, because working from the “bottom” of the movement (hands close to chest) triggers shoulder/arm pain.

Though this may explain why a person may move the handles only two inches at the top of a chest exercise, it certainly doesn’t explain why they apply this blunder to all their other exercises including legs!

When I see people applying micro-reps to every single machine, this tells me it’s their very misguided approach rather than a physical disability.