Why Do People Sing to Songs in Public that Others Want to Hear? 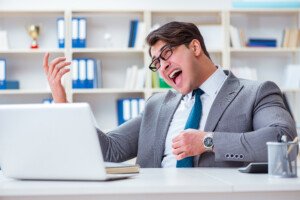 A song you love is on a workplace radio or public speaker and someone starts singing to it, destroying your listening pleasure!

It’s one thing when people sing or hum in public – and there’s no playing song they’re singing or humming to.

This can be mighty annoying to some individuals.

But something needs to be said about the singing (and humming) that mirrors a song that’s simultaneously being played on a workplace radio or other public space like a gym, hair salon or cafe.

This behavior is a whole new animal, because it disrupts another person’s listening pleasure to the playing song.

Perhaps they believe their voice is better than the original artist’s. But usually it isn’t. Most can’t carry a tune to save their lives.

But even if they do have great vocal talent, this STILL cuts into nearby people’s attempt to listen to the song, including its instrumental arrangement, which often is what makes a song a big hit.

I sound awful, too, when I sing — but then again, I never sing to songs in public that others want to hear (or in private, for that matter).

One might argue that vocal skills don’t matter because the person doing the “cover” is covering out of joy, rather than to impress people with their voice.

“People who sing along with public songs tend to do it as a way to show appreciation for the music,” says Patricia Celan, MD, a senior psychiatry resident at Dalhousie University in Canada.

Dr. Celan explains, “There is also an element of getting lost in the music and forgetting the outside world.

“This can be appropriate at a large concert where many people are singing along and feeling the music, but if there is only one person singing along to a performer, it is incredibly awkward and suggests a disregard for other people.”

The Hijacked Joy of Others Who Want to Listen

If you can sing circles around Madonna or Justin Bieber, that doesn’t matter.

The sound that fans fell in love with was what Madonna’s voice does for “Oh Father” or what Phil Collins’ voice does for “Another Day in Paradise.” Or Ariana Grande or any Joe Recording Artist.

Even if you sound like Barbra Streisand or Pavarotti, THAT’S NOT RELEVANT.

If you love the song, be quiet and listen so that others can too.

Why can’t you derive joy by keeping silent while listening? That way, you get to hear the music that lifts your soul. How can you have this experience if you’re singing over it?

One time a song that I really loved came on the radio at a place I used to work. I was looking forward to the next four minutes of enjoyment, when a coworker began singing along.

I was infuriated. I could barely hear the song. I blurted, “Excuse me but I’d like to listen to the song, thank you.”

He stopped and apologized.

Okay, I was a bit gruff, but it seems that no matter how sweetly you could ever ask such a person to be quiet during the song, he or she would be offended.

Had I walked over to him with a smile and gently said, “Can you please not sing along so I could hear this song?” he’d probably still feel slighted. There’s no way around this.

Reasons for Singing to Songs I Found Online

So is anyone who wants to listen to the piece. If you’re filled with music, then stay silent and listen to it and respect others’ desire to listen as well.

This excuse came from the same person who said, “We’re filled with music.”

Coping with what? Being filled with music?

What about other nearby people who might have attention deficit disorder too?

Don’t you think that your singing along to a playing song impedes their ability to concentrate on the music?