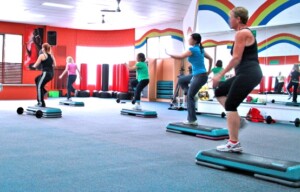 Permanent hearing loss from loud fitness class music is not a part of health.

Fitness instructors and enthusiasts strive to avoid putting bad things into their bodies.

But they think nothing of subjecting their ears — and those of their class participants — to thundering music.

Inside your ear is a fragile organ, the cochlea. It contains nerve cells that enable you to hear.

Those nerve cells are far more fragile — and prone to permanent injury — than are muscle fibers.

Hearing impairment is more common in the elderly because by the time you’re 70, your ears have been bombarded with enough loudness to result in significant noise induced hearing loss (NIHL).

Many people under 40 suffer from this and don’t know it. Hearing loss is never reversible!

You can train your body to become stronger. But you cannot train your ears to become resistant to the hazards of cranked-up music.

Over time, hearing becomes dulled as more and more of these neurons get destroyed by booming music.

When you strain a tendon or muscle, you feel it. But when cochlear neurons die, you feel no pain.

There’s no swelling. No soreness. You’re tricked into believing no harm was done.

NIHL gradually creeps up on you. It’s so easy to blame the problem on other people mumbling.

You insist, “My ears are fine!” But how do you know your hearing wasn’t sharper five years ago?

You may be lucky and still have decent hearing, but if you’re a crank-up-the-volume-type, there’s a good chance your decent hearing isn’t as crisp as it used to be.

Fitness class instructors get hit the hardest, because they typically stand close to the source of the music.

Sometimes, speakers are almost as big as the instructors, and literally only feet away from them.

People are quick to admit having all sorts of ailments, including bad vision. But few people will dare admit to suffering from hearing loss, with its stigma of being associated with old age.

Part of the denial is convincing yourself that people with keen hearing have “sensitive” ears. That’s like saying a person with 20/20 vision has “sensitive” eyes.

“In most cases, the ear recovers anywhere from several hours to several days later.

“Repeated exposure to noise that causes a TTS can certainly put someone at greater risk for permanent noise-induced hearing loss.”

A decibel (dB) is a unit of sound volume. “I have seen reports of noise levels in aerobics classes ranging from 100 to 120 dBs,” says Resnick.

These numbers are scary, considering that fitness classes go for one hour, and that many people instruct up to 10 or more classes per week.

Most hearing loss is stealthy, creeping up on the unsuspecting person like a panther on the prowl.

The ability to detect high frequencies is the first to become crippled. Vocal sounds consisting of the letter combinations ch, sh and th are relatively high in frequency.

The person with hearing loss has difficulty discerning these combinations, as well as words in general, especially when spoken across a room, in a noisy environment or over the phone.

Loud Music to Motivate the Class

If thundering volume is necessary to keep students perked up, then how is it that a karate instructor can get his class to knock off 50 pushups and 200 sit-ups, dozens of fancy kicks and other strenuous routines, for nearly an hour without so much as a single note of music?

Resnick says, “There was a study (Journal of the American Academy of Audiology, 2003, Vol. 14, No.1) in which they kept the sound level to 85 dBs in an aerobics class, and found it did not reduce the participants’ enjoyment or motivation.”

Keep in mind that it’s easy to say, “Well, if so-and-so thinks my music is too loud, then she doesn’t have to take my class.”

But perhaps other participants feel the same way, but don’t have the nerve to speak up.

Furthermore, many people can’t exercise unless they are led by an instructor. The instructor, not the high-tech sound system, is the leader.

How do I know the music is too loud?

Measure the volume with a sound level meter: Over 105 dBs is too loud for one hour.

Try carrying on a normal conversation from five feet away. If you must talk louder or strain to understand, then the music is too loud.

What if participants beg to crank up the volume?

They won’t if at the beginning of the class, you announce that the volume is already set and will stay that way for the entire class.

What about ear plugs?

• Ask yourself if it’s normal to request that a person repeat something when he’s near you. How often do you find yourself doing this?

• Must people yell out your name several times from across a noisy room or down a hall before you can hear them?

Do you have trouble understanding conversation in a noisy (not necessarily loud) environment?

• Ringing ears after exposure to high volume. But if there’s no ringing, do not assume there’s no damage!

And ears that are already damaged can still sustain additional injury in loud settings!

“These numbers don’t mean that hearing loss will absolutely occur with exposure, but that there is a risk of hearing damage,” says Resnick.

“There are significant differences in individuals’ susceptibility to NIHL”

Don’t let this risk vs absolution lower your guard!

After all, similarly, not everybody who smokes will get lung cancer, but we all know that smoking causes lung cancer, so why be foolish and take the risk?

You don’t know your individual susceptibility to NIHL until it’s too late!

Andrew Resnick, Au.D., has a private practice and has worked at several major medical centers in NYC. He has extensive experience in both pediatric and adult audiology, with particular areas of interest in new hearing aid technology and hearing conservation for musicians.