600 Pound Life: Why Get Surgery if They Lose Weight on Their Own? 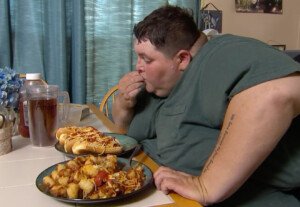 If Dr. Now’s patients on “My 600 Pound Life” can initially lose weight all on their own, why do they need the surgery then?

Dr. Nowzaradan requires his new patients to first lose weight on their own, in order to be approved for weight loss surgery.

Sometimes he gives them one month to fulfill the requirement. Some patients get two months.

The month-only weight loss requirement is usually 40 or 50 pounds.

For two months it may still be 50 pounds, but sometimes is more.

Despite the varying permutations, this requirement has many viewers wondering WHY, if patients can “show” Dr. Now that they can lose 50 pounds in one month on their own – and especially in cases where they’ve lost way more than that in just one month – or a hundred pounds or more in two months – WHY they even need the surgery at all?

In a 2020 episode, David had lost around 150 pounds on his own, even though long prior to that, he had qualified for the surgery.

But he wanted to have the surgery at the same time as his brother, Benji, who had failed the qualification.

So while Benji was continuing to try to lose weight on his own, David kept dropping pounds.

But finally, David pointed out that it was getting increasingly difficult to maintain the dietary changes to continue losing weight.

So he decided to go ahead with the surgery.

Initially he had lost 83 pounds on his own in that first month, after Dr. Now wanted him to lose 40.

They’ve proven “they could do it.” Yes, we know that. But…just because they can do something for a month or two, or three, doesn’t mean that they can sustain this for the rest of their life.

The motivation to pull off significant weight loss on their own is tremendous: the opportunity for a gastric bypass or sleeve surgery.

So of COURSE, they will then find the inner resolve to stick to Dr. Now’s 1,200 calorie/day diet.

They know that this very strict plan is very temporary. The thinking is, “I only need to do this for one [or two] month, and then I’ll be rewarded.”

You might be thinking that the motivation to simply LIVE would be substantial enough to stick to a diet without surgery.

But I challenge you to stick to 1,200 calories a day of just animal proteins and low carb foods (vegetables) plus sugar-free jello and other sugar-free beverages.

How long will you last?

But wait a minute – if you don’t weigh 600 pounds, you don’t have the motivation, right?

However, what if you want to lose just 20 pounds? Go ahead, try the 1,200 calorie/day, high protein, low carb diet. See how long you can stick to it.

Now imagine sticking to that long enough to lose 400 pounds.

In someone who’s at 600 pounds, the goal is to initially drop as much weight as possible over the shortest period of time, since many of these patients are on the brink of sudden life-threatening illness.

Portion Controlled Eating Is Not Sustainable

To someone who’s used to eating two large pizzas, a dozen donuts and a liter of soda at one sitting, a portion-controlled or “normal” diet is simply not sustainable long-term.

It’s all relative. The only way to make it sustainable is with weight loss surgery, which reduces the volume of food that the stomach can hold at a single meal. It also reduces hunger.

When patients on “My 600 Pound Life” are faithfully sticking to a diet, the show’s editing may make this seem easy.

But it’s an hourly struggle for many. The hunger never seems to go away. The cravings are relentless. And then there’s the emotional component: Food is their drug.

Now suddenly it’s gone. Sticking on Dr. Now’s diet – or even a more typical diet of 2,000 calories/day – is torture for most of these men and women.

But the ones who are dead-serious about turning their lives around, who refuse to make excuses like Penny, Pauline, Angie J and Jeanne, will be the ones who’ll beat down that torture and lose the preliminary pounds on their own.