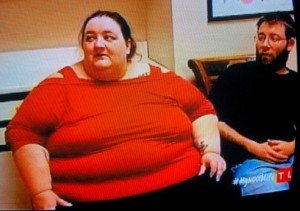 Just when you thought Jeanne took the cake (no pun intended) for the Nasty Award on “My 600 Pound Life,” Angie J. comes along & makes mincemeat out of her.

Poor Daisy, Angie Johns’ granddaughter. Will this three-year-old repeat the cycle of self-destruction?

Poor Daisy. She looks innocent now (preschoolers are quite resilient), but don’t be surprised if by the time she’s 15 she’s 300 pounds, smokes and is pregnant by a 22-year-old.

Angie J. is in the seventh season (2019) of “My 600 Pound Life.” Certainly she’s seen enough episodes to know how Dr. Now’s program works.

Hasn’t she seen other patients with serious attitude problems — like Jeanne and Penny?

Certainly she thought, while watching those very difficult people, “Gee, I’d never be like that if I was on Dr. Now’s program.”

How do you get on “My 600 Pound Life” without first knowing how things are supposed to work? 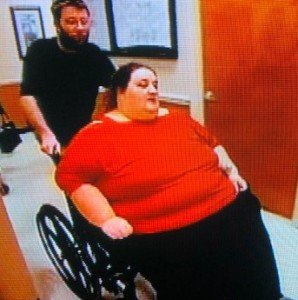 I guess Angie J. never watched “My 600 Pound Life” more than once by the time she decided to get on.

How can Angie J. blame a scale for being wrong when it showed a weight gain?

How dare she accuse Dr. Now of “punishing” her with another weight loss goal?

How dare she call her husband (the only man in her life who apparently hasn’t mistreated her) “pathetic” and a “loser” just because he won’t go to the store in an unfamiliar town and buy her food?

We all know that Angie Johns had a horrible childhood.

Even though (reportedly) her parents didn’t physically abuse her, she stated that when she told her mother that a family friend had molested her, drug-addict Mama didn’t even defend her. That would cause much more damage than a belt whipping.

But there comes a point in time when a person, who grew up without love, praise, structure and healthy food, must take accountability.

At only 13, Angie slept (with consent) with a 27-year-old and got pregnant (eventually giving the baby away).

Many will say that a 13-year-old should not be blamed for such decisions, being that up to that point, she’d been living in a highly dysfunctional home.

And furthermore, the perv who slept with her got away with it. Angie talked about this “first, real relationship” as though it was perfectly normal for a 27-year-old to have sex with a 13-year-old.

Again, there comes a point when an individual, despite growing up in a painful, train wreck household, must take some responsibility so that her future children don’t suffer – like Desiree (Angie’s daughter) – who’s had two out-of-wedlock kids by age 21.

Angie J. at one point says that she won’t allow her husband, Justin, to be a caregiver because otherwise he’d “cross over” from being a husband.

But go ahead, heap the caregiving duties on Desiree (whose face tells a lifetime of pain) so that she crosses over from daughter to caregiver.

Angie had the money all along to move to Houston.

She whined to Dr. Now over the phone she didn’t have money to move to Houston (which she eventually somehow obtained).

My first thought was, “Stop buying cigarettes and so much food, and you’ll have plenty of money in no time!”

Enablers Fear the Wrath of Angie

Being that three-year-old Daisy is living in such an environment, it’ll be easy to understand if one day she’s on the 30th season of “My 600 Pound Life,” referring to the weight loss program as “bullshit,” just like her grandmother did.

Remember Jeanne? She was just nasty. Who didn’t think there could be a worse patient?

Well, Angie J. takes the cake for that. She’s even worse than Steven Assanti. In some ways, anyways.

Each time Angie was given another chance by Dr. Now, she admitted to slipping up on the diet.

But then, during her last chance, she said she had to starve herself and eat only salads (though two slices of bread were sitting nearby) because the diet had not worked.

Angie kept making one excuse after another, ultimately blaming Dr. Now for her failure.

What’s really provoking is that many body positivity influencers insist that you cannot tell a person’s health by their size.

Not only can a person’s size be highly indicative of their health, but so can their voice!

Dr. Now detected drug use simply by Angie’s voice over the phone – and toxicology tests later on confirmed this.

Angie is not only a compulsive overeater, but she’s a heavy smoker (according to the toxicology test) and is on the narcotics bandwagon, also admitting to smoking pot.

She was offered a rehab program by Dr. Now, but rejected even that.

Dr. Now stated that Angie J. will die soon if she continues on her current path.

And because tormented generations tend to repeat themselves, daughter Desiree will continue subjecting her kids Daisy and Karson to a deranged home life.

And if we see Desiree on the 15th season of “My 600 Pound Life,” we won’t have to wonder how she got that way.

In the April 14, 2021 airing of “My 600 Pound Life,” Angie’s husband Justin left her — after they had an argument over his relapsed drug problem.

She appears to be of less weight than when she started the program, but has not made any true strides at weight loss.

Because Angie J is now alone in an apartment and has mobility impairment (essentially bound to a wheelchair), she is not able to care for herself, but still wants to be on Dr. Now’s program.

Her neighbor David invited her to stay with him and eventually the two became an item. But oddly, he then booted her out of his home — yet continued maintaining his status as her boyfriend.

The only thing that makes sense is that she was being too demanding and possibly verbally abusive towards him, and he could no longer take it. Nevertheless, David was keeping Angie company in a park while she stayed there with no place to live.

The big question is, why doesn’t Angie check into a homeless shelter? Homeless shelters do not turn people down just because they weigh 500 pounds.

Another big question is why doesn’t her best friend Mandi take her in?

Amazingly, finally, Angie agreed to rehab as recommended by Dr. Now (whom she verbally assaulted while lying in a hospital bed not long before that), for her substance-abuse.

Surprise! Angie was detoxed and was approved for weight loss surgery.

At some point soon after the surgery, David dumped Angie. However, just in the nick of time, a former neighbor of Angie’s, James, invited her to stay at his place for about a month.

For a few months following the surgery she reported feeling ill and unable to hold much food down. She lost 33 pounds during that time, but continued feeling sick, and underwent some tests.

The tests were all negative, and eventually, and she moved to Ohio to stay with her brother, where she reported that she was now beginning to feel normal.

Her final recorded weight was 310. In fact, at the very end of the show, Angie was noticeably smaller than her daughter Desiree — who appeared to be bigger than ever. 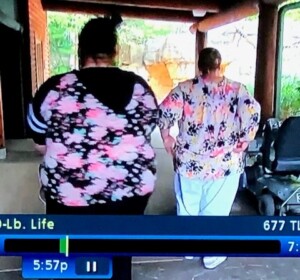 Angie is on the right. That’s her daughter Desiree on the left.