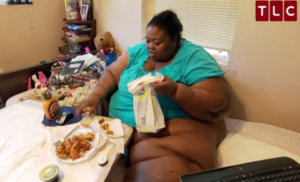 More attention must be given to the disenchanted souls on “My 600 Pound Life”: the enablers!

One of the recurring themes among the people who enable (bring huge amounts of food to) a person with super morbid obesity is, “I love her; how can I say ‘No’?”

Viewers are incessantly stunned by these types of comments straight from the mouths of the enablers — who may be the spouse, significant other, parent, child or even sibling of the super morbidly obese man or woman who’s bed- or chair-ridden due to their size.

There are many things in life that are incredibly difficult to do. Saying “No” to your 600 pound family member should not be one of them — when it’s literally a matter of their life or death.

Many enablers are spouses or significant others.

I’ve watched every episode of “600 Pound Life” thus far. A common scenario is that a man marries a woman who weighs around 400 pounds — but over time, she gains even more weight.

Less common is a woman who marries a man of this weight, then  post-marriage he gains and she enables, and it’s a vicious cycle.

The eating-disordered spouse (or significant other) continues gaining weight until she or he is rendered either virtually non-functional or semi-functional.

The able-bodied spouse continues to bring the 600 pounder food in gigantic quantities.

How much blame should we place on the enablers in “My 600 Pound Life”? 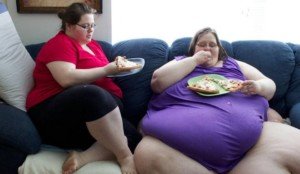 Dr. Younan Nowzaradan, the bariatric surgeon featured on “My 600 Pound Life,” has passionately called out enablers on quite a few episodes.

He clearly places some of the blame on the enabler. This is obvious when he first meets the patient and the enabler with him or her.

One enabler, the mother of the subject, even explained that there was no point in saying “No” because her daughter was capable of obtaining the food anyways.

Don’t these enablers realize that saying “No” can mean the difference between 600 and 500 pounds?

Perhaps over time, refusing to play the role of enabler would help the subject lose some weight — and “some” is better than continuing to gain.

Weighing 500 pounds is dangerous, but not as dangerous as 600 pounds.

Is It an Issue of Will Power with the Enablers?

It’s a defeatist approach, bringing the food because “She’ll get it anyways.”

She—or he—if severely compromised by all the body weight, will NOT always get the same amount of food “anyways.”

It would be too painful to “anyways” get the same amount of food.

• It takes all of their might just to get into a car.

• It takes all their energy just to walk from bedroom to kitchen.

• It’s logical to conclude that without the enabler feeding them, these subjects would actually consume FEWER calories.

If the enabler stopped enabling, a severely incapacitated overeater would be forced to, for example, consume 15,000 calories a day rather than 20,000.

Several thousand calories less per day would result in weight loss — and again, 500 pounds is not as bad as 600 pounds.

But they won’t keep losing 42 pounds indefinitely at 15,000 calories per day.

There will very soon be a plateau, because 15,000 a day is enough food for seven adults.

But as mentioned, SOME weight loss is always better than staying at the same gargantuan weight, let alone continuing to gain fat.

But won’t the weight loss make the subject more mobile and hence, more able to get up and cook big meals?

Most likely this is exactly what would happen, and they would be right back up there at 20,000 calories/day — and start gaining.

However … this likely outcome should never be used as an excuse for enabling the individual!

Furthermore, dropping 50 pounds JUST MIGHT spark motivation in the subject to continue trying to lose weight.

The enablers on “My 600 Pound Life” will never be able to come up with a logical, rational, understandable excuse for their behavior — at least none that Dr. Nowzaradan accepts.