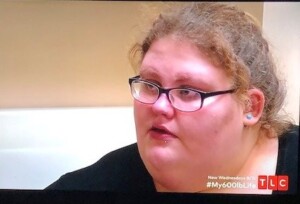 Seana’s story on “My 600 Pound Life” ranks as one of the saddest and bleakest for several reasons.

At only 22 she was seemingly destined for success with Dr. Now’s program.

But this young woman was beaten down in life pretty much from the start – by her cruel father.

Though there was no claim of molestation, that doesn’t matter. Words can slice like a hot knife through butter, and there was also a claim of recurring physical abuse.

Her father verbally abused her mother, and when the girl was eight (and a whopping 150 pounds), her mother, Cricket, finally decided to leave her awful husband.

So now the viewer is thinking, “Okay, this abusive sperm donor is out of Seana’s life when she’s only eight; she has a chance to rebound and gain some sense of self-worth.”

However, Cricket makes the disastrous decision to allow her ex to take Seana for the summers.

This was after Cricket believed that her then-husband wanted to ignite the gas tank of his vehicle with a cigarette – while his daughter was in the vehicle.

Cricket admits she thought that Seana’s father would be good to her since he was going to see her only during summertime.

So off she ships the child to the man with whom she admits to getting in a “fistfight” outside after learning that he wanted to burn her to death.

Some Questions for Cricket

#1      Being that you ended the marriage because you feared your husband might fatally harm Seana, how could you be STUPID enough to think he’d suddenly become a good father just because he’d be getting the girl only for the summer? Did you also forget that he’d been verbally abusive to you for years?

#2      Seana pretended to you that the summer visits were fine, and when you questioned her about the bruises, she said she’d fallen off a bike or whatever. How could you not see through that? Funny, she never “fell” when she was living with YOU!

Why do you suppose that your own daughter never trusted you enough to report to you that Daddy was still shitting on her during her summers with him?

For at least seven summers, Seana kept silent about the abuse, never once trusting her mother. She claims she didn’t want to upset her mother, but let’s face it:

When there’s a strong level of trust between child and mother, that child will beg her mother not to visit a house of horrors over the summer.

That Seana put up with this for all those years makes viewers question what kind of mother she had. Yes, her mother has paid for Seana’s adult living arrangements. But you can’t buy your child’s self-sufficiency and self-worth with a checkbook!

All moms should be “Go To” moms: women who project a Mama Bear persona; the protector, one who empowers her child. Cricket let Seana down big-time.

When Seana was 16, Cricket took her to a mental health center, and that’s when the girl finally revealed the truth about all those summers.

Many viewers of “My 600 Pound Life” may really feel for this 650 pound woman who, due to her age, is still remarkably mobile. 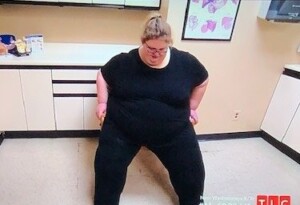 Seana lives alone in a nice clean place but gets help from Derrickus, who’s paid by her mother.

• Viewers can easily imagine that Seana never learned to even like herself, what with Dad hating on her all throughout her developmental years and Mama not caring enough to stop it, plus bullying in school over her weight that got so bad that she dropped out at 16.

• It’s not difficult to understand why her only reason for living is food. When there’s no food, her world is empty and barren: no supportive siblings; no boyfriend; no other friends; no other relatives are ever mentioned; all she has is a small dog.

• Her mother is seen popping in and showering her with kisses, but remember, this is the same mother whom Seana was afraid to report all the summertime abuse to. The same mom who thought nothing of sending her daughter to spend summers with a man who wanted to light her on fire. Way to go, Cricket!

• Unlike nearly every subject of “My 600 Pound Life,” Seana has no live-in enabler and can manage all personal care (but the paid Derrickus does bring her food).

She’s never seen bossing anyone around, starting arguments, behaving melodramatically or manipulating anyone.

• Unlike quite a few “My 600 Pound Life” train wrecks, Seana never sasses Dr. Now; never whines about how “unfair” he is nor blames weight gain on water or a malfunctioning scale.

• Only a few times she exhibited deluded thinking, to the tune of, “Dr. Now doesn’t understand,” and making excuses for not following the diet because she kept losing the instructions.

Outside of those blips, she came across as genuinely sincere but extremely defeated, depressed and viewing herself as hopeless and pathetic. Gee, how do you rise above THAT?

Seana’s story on “My 600 Pound Life” will make an excellent “Where Are They Now” episode.

She never loses enough weight to qualify for surgery, and come end of show, her weight is nearly the same as it was in the beginning.

At the very end, Seana describes how she’ll continue with six months of psychotherapy and is shown taking a one-on-one water exercise class. 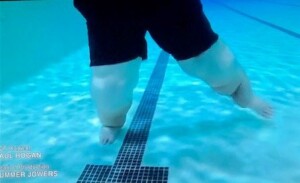 Viewers are left feeling that there just might be some hope — even though she moved to Houston, leaving her without Derrickus and without proximity to her mother.

No doubt Seana thinks she’s unlovable and worthless (regardless of body weight), being that her own father despised her throughout childhood.

This set her up for feeling — and being — incapable of forging healthy relationships and friendships. The only boyfriend she ever had was abusive.

Perhaps on some level — maybe deep or maybe at the forefront — Seana acknowledges that if she lost 500 pounds, she’d be just as miserable, depressed and saddled with hopelessness — but in a smaller body.

Her mindset is perhaps something like: “So I may as well keep eating tons of food — my only pleasure in life — even if it means dying before I’m 30.”

Viewers of this heartbreaking “600 Pound Life” episode will note that Seana seems to have a mental handicap.

However, a totally broken spirit (by an abusive father and dis-empowering mother) can yield vacant looks, a listless voice and submissive responses to male authority (Dr. Now) such as “yes sir,” “no sir,” and “I don’t know.”

I’ve had part-time jobs with mentally handicapped adults. Believe me, some can be very dynamic and exuberant. Intellectual deficit is not synonymous with flat emotions and blank facial expressions. But being completely broken and feeling worthless CAN.

Seana was no manipulator. She was just plain damaged, courtesy of BOTH parents: an abusive father and a mother whose only solution was to throw money at her (guilt money?).