Cindy on My 600 Pound Life: Seana Vibes but Worse 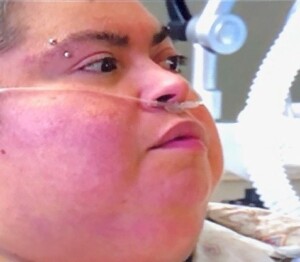 Cindy on “My 600 Pound Life” shows serious Seana vibes and an even bleaker future.

She was the one who seemed dead in the eyes, never smiled, spoke in an almost monotone voice and had no family, no significant other, no friends and no kids.

But at the end of her episode, despite still being around 600 pounds, she was shown doing water exercises with a trainer.

Cindy’s episode ended with her being transported via ambulance back to her home: a small unit with a full-time, insurance-paid caretaker who prior had been bringing her meals large enough to feed four adults.

Cindy has had a very lonely adult life. Apparently she never had a significant other, has no kids, no dog, not even a kitty.

Her father and sister are dead, and it looks as though her mother and two brothers are not in her life any more than maybe an occasional text or phone call.

But Cindy has Sandy, a friend whom she met when the latter was her caretaker in the past.

Sandy talked Cindy, who’s bedbound but can use a walker to get to the toilet, into consulting with Dr. Now.

She also talked her into leaving her home and caregiver setup to move in with her, as her house is relatively close to Dr. Now’s office.

Sandy had an oversized chair-bed waiting for Cindy in her own room.

Cindy As Dead in Spirit As Seana 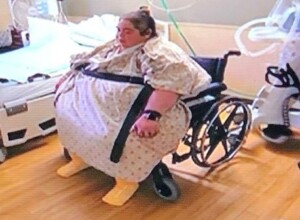 Like Seana, Cindy screams bleakness, hopelessness and depression, and speaks in an almost monotone, gravelly voice.

Not surprisingly, she was molested at age eight but didn’t tell her mother till a few years later.

The assaults ended, but — according to Cindy herself — she continued overeating to gain a big body, believing this would protect her against any more sexual assaults.

The episode makes no mention of any dreams she ever had, of any skills or activities that she was ever involved in.

The viewer is made to believe that all Cindy ever learned to enjoy in life was eating as much as possible.

Food is her antidepressant, especially after suffering a huge blow after her father died from alcoholic liver cirrhosis.

No Point in Losing Weight

What’s the point of losing weight, which would mean giving up her antidepressant and the only thing that matters to her?

There is nothing awaiting her once she loses 350 pounds.

There is no mention of any career aspirations or desire to do anything else in life, for that matter. Not even a kitty to take care of. 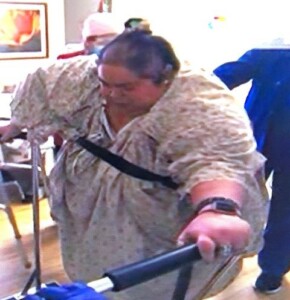 Though it’s not shown in the episode, viewers can certainly assume that the reason Cindy never loses weight is because Sandy keeps bringing her enough food to maintain a weight of over 600 pounds.

Viewers will certainly wonder WHY Sandy — who was in tears early on in the episode when Cindy expressed reluctance to see Dr. Now — can’t refuse Cindy’s demands for so much food.

In other episodes, family members, significant others and spouses have said, “It makes her/him happy,” when explaining why they keep bringing them food.

But this episode is extremely puzzling, because Sandy is not Cindy’s mother, daughter, significant other or sister.

Cindy has heart failure and lost over 35 pounds while hospitalized for a few weeks, but after going back to Sandy’s house, regained the weight.

Several times, Cindy says she keeps trying so hard to stick to the program, but viewers can easily see that there just is no fire inside her. There’s not even anything smoldering.

Like Seana, Cindy seems dead inside, though in the episode there are transient sparks of life, such as when she’s painting Sandy’s nails.

This may be the bleakest episode yet of “My 600 Pound Life,” though Seana’s childhood was far worse (Seana’s father tried to burn her to death.).

Since she’s 45, and Dr. Now predicted she’d be dead by 50, the future is looking pretty dismal for Cindy.