My 600 Pound Life: Pauline Is Another Penny 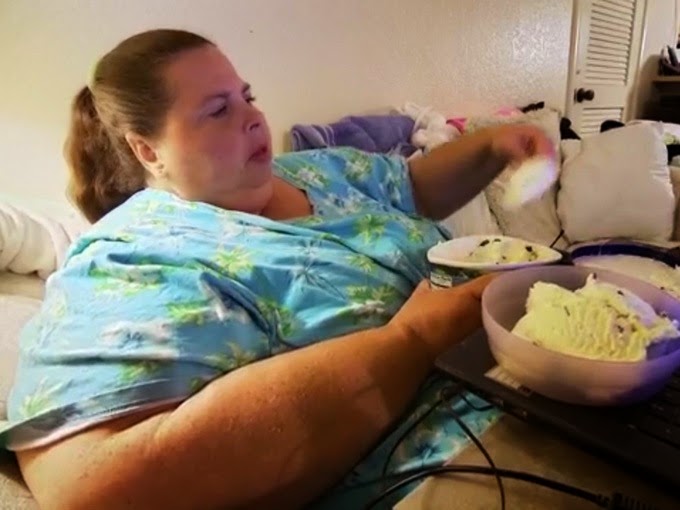 Penny from “My 600 Pound Life” now has a twin sister, Pauline, who’s in denial and refuses to take responsibility.

Dillon’s pilot light, if he ever had one, is out. He’s obese, apparently has no goals and takes care of his mother full-time.

In Dr. Now’s office, it appeared that Dr. Now was about to point out that Dillon was an enabler after he asked Pauline, “Who gets you your food?” when Pauline interjected and said that her son is not to blame because he listens to the authority of his mother.

At that point, I thought, “What’s Dillon afraid of if he refuses to get her all the food—that she’ll leap out of bed and chase after him?”

Pauline is able to walk but for only a few steps. She and Dillon moved to Houston for the surgery, and she tried to lose 30 pounds prior to surgery at Dr. Now’s instruction.

She kept saying how difficult everything was because she and her son were out of their element.

I think I’m madder at Dillon than at Pauline because he provided absolutely no motivation or inspiration.

This lost young man could have purchased a pair of light dumbbells for Pauline to do upper body exercise throughout the day.

He could have purchased some books and magazines, a crossword puzzle book, anything. Instead they were shown zoning out in front of the TV.

Doesn’t Pauline know how to use a computer?

Why didn’t Dillon have her spend some time on his?

All of these activities would have made it easier for her to stay on a diet.

Pauline gained weight, so Dr. Now admitted her to the hospital where she lost 44 pounds in two weeks.

Pauline Is Another Penny

By the time she was discharged from a lengthy hospital stay following surgery, she had lost about 135 pounds.

In the ensuing months, Pauline continued to lose weight, but only a few pounds per month. Unlike Penny, she was losing, BUT…her attitude was very similar to Penny’s.

Pauline refused the physical therapy, though she was shown wading in a pool on her own.

It never occurred to her pathetic son to get her signed up with a gym to do some upper body workouts.

Dillon continued to bring his mother enough food to prevent her from losing more than a few pounds per month: That’s obviously a ton of food to near-maintain 530 pounds.

Like Penny, Pauline kept making excuses: She gets dizzy when she walks; she’s afraid of falling if she walks for too long.

I wondered why Dr. Now didn’t intercept at that point and say, “Then don’t walk far from your house. Instead walk inside your house back and forth from one end of a room to another.”

I also wondered why Dr. Now didn’t arrange for some mental therapy. I saw nothing in Pauline’s childhood, as it was described, to explain how she got way over 600 pounds.

Pauline really pulled a Penny towards the end when, after leaving the doctor’s office, she said she was offended by the way he kept pushing her too hard, after he had busted her for her lie about the phone calls from physical therapy.

She went as far as proclaiming that she knew her body better than Dr. Now did. And she said more than once that she had to do this at HER pace.

At Pauline’s pace, it will be YEARS before she gets down to a healthy weight, losing only a few pounds a month. She doesn’t have years. At 51, she may have only months to get the whip cracking.

As long as her voiceless son keeps enabling her, Pauline will be another Penny.

The last scene of this original episode showed them at a bingo hall, with Pauline announcing something like, “At least I’m getting out and doing things.”

Yeah, right, playing bingo and feasting on junk food there will help you lose weight.

She’s in total denial, thinks Dr. Now is too pushy and doesn’t understand her, refuses physical therapy, refuses to work on her walking (Dr. Now kindly admonished her at month 12 for using a motorized wheelchair for her final weigh-in), cries tears but won’t take responsibility, and has a deadbeat, enabling son with no goals.

The July 3, 2019 airing of “My 600 Pound Life” reveals that Pauline lost enough weight to get skin removal surgery for her stomach, having gotten down to around 242 pounds at her lowest.

Then she started gaining again, though agreed to home physical therapy to regain the ability to walk.

Often having a good dose of attitude, Pauline ultimately gained back around 60 pounds, disqualifying herself for any additional skin removals for at least six months from that point forward.

Nevertheless, she was able to walk, without any assistance, to what would be her last weigh-in.

Pauline decided to quit the program, announcing that she knew what she had to do and “didn’t need this anymore,” referring to Dr. Now’s program.

However, it’s clear that she’s now headed in the wrong direction: more weight gain to come.

That 60 pounds will very likely soon be 100 pounds and she’ll be back in a wheelchair. 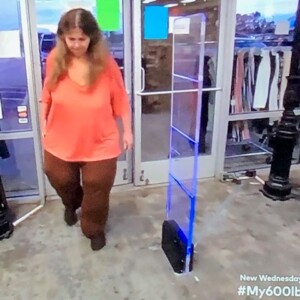 She lost enough weight to qualify for skin/lymphedema removal surgery on her left leg.

Several weeks later she qualified for a second surgery on her right leg, bringing her postop weight down to 208, with a total weight loss of around 500 pounds.

Pauline reported that her son Dillon no longer needed to drive her around, and she was last filmed sitting up front in an aircraft (whether she was sightseeing or taking flight instruction was not clear).