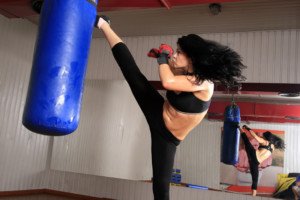 One of the Chuze Fitness gyms I go to won’t put up a heavy bag because, as a supervisor told me, it might intimidate members or make them feel that their motto of “Less Attitude” is being contradicted.

Or something to that effect – I don’t recall every single word she said because I was too shocked to believe what I was hearing.

This warped train of thought wasn’t from HER. She was just the messenger.

She herself, not too long prior to my inquiry, had suggested a heavy bag to be hung on the second floor, where there’s plenty of room in a particular workout area.

But she had been met with resistance by these decision makers – or perhaps there was only one she had spoken to – but either way, one of my responses was, “Who ARE these people?!”

The supervisor said that some gym members might see the heavy bag as more attitude, when the gym is supposed to be “less attitude,” and that this would turn those members off.

I came back with the following:

“What IS this, Planet Fitness?”

“Who ARE these people?!” (at least twice, as I couldn’t believe anyone could be so narrow-minded and insulting to the patronage)

“Why not bring the heavy bag in anyways instead of making assumptions, and THEN if it doesn’t go over well, it can be removed?”

I also pointed out that if anyone’s capable of being intimidated by anything in a gym, it would be the squat-rack area, where big men are seen sometimes lifting over 400 pounds.

I then pointed out that many men who work out on a heavy bag are “smaller guys, and some are even women.”

The supervisor heard me well, because – as already mentioned – she herself had suggested a heavy bag not too long prior.

Whether it was a regional manager she had gotten the ridiculous response from, or someone in corporate, it begs the question:

Where on earth did this person, or people, get the idea that a heavy bag would frighten or offend members?

I’m betting that a heavy bag would attract a lot of women who enjoy “cardio kickboxing” group classes.

These classes usually don’t include an actual bag; participants strike out at the air. A bag would make things so much more fun.

Furthermore, many women know that hardy heavy-bag workouts will help them lose weight and drive up confidence.

What about the men doing heavy bench pressing? At this particular gym, the bench press stations are in front of the cardio equipment.

Thus, any easily-intimidated cardio machine user, who pedals leisurely or hangs onto a treadmill, will clearly have in their direct range of vision big muscled men pushing up very heavy barbells.

Furthermore, other upper body equipment is also plainly visible from the location of the entire cardio machine area – where many elderly or “out of shape” members exercise.

Chuze’s decision-makers don’t seem too concerned over a muscle-bound man in a tank top, benching a very loaded barbell, being in the direct line of sight of a 105 pound elderly woman on a treadmill.

Yet meanwhile, Chuze Fitness thinks it’s a bad idea to hang a heavy bag in the upper level area where younger people do all sorts of routines:

Are the people who do these kinds of routines really capable of being intimidated or offended by someone hitting a heavy bag?

In all my years of training at different gyms, I have never seen a hulking bodybuilder with a spiked collar and skull tattoos using a heavy bag.

Faithful heavy-bag users exude discipline and a high degree of focus and concentration.

That Chuze Fitness’s upper-level management would blindly assume that such individuals would be intimidating is just flat-out insane.

• If anything, a woman slugging at a heavy bag would be inspirational to nearby women, not off-putting.

• A man would motivate both men and women to try heavy-bag routines as an alternative to the same boring aerobics.

• Many personal trainers have their clients do heavy-bag drills. Does Chuze not realize this?

The concept of “intimidation” or the wrong attitude, or too much attitude, is just mind-staggering. Shame on Chuze’s management.

I have yet to witness gym members fearfully clearing out of my way after I conclude a heavy-bag workout at 24-Hour Fitness, whose decision makers regard their members more like adults than easily-scared children.

I will continue going to Chuze, however, despite their absurd rule of no heavy bags, as this particular facility has a few other features that I like.

No heavy bag. It would encourage too much attitude. Oh my, heaven help us.