Under what circumstances can a woman be strong, fit and healthy at 300 pounds?

One might argue that Sarah Robles is strong, fit and healthy because, at over 300 pounds, she lifted 356 pounds in the clean-and-jerk weightlifting event at the 2016 Olympics.

One might insist that Cheryl Haworth, also over 300 pounds, is healthy and fit because at the 2000 Olympics she snatched 275 pounds.

A fair question is what kind of shape their knees will be in when they’re 50 – not because of all the deep squatting required of their sport – but from weighing more than 300 pounds.

How will their hearts be functioning? No matter how strong these young women are, the human body just isn’t designed to support so much weight.

The Body Positive Movement Misses the Boat Big-Time with Their Claims that 300 Pound Women Can Be Fit, Strong & Healthy

After all, just how many 300 pound women train like Sarah Robles and Cheryl Haworth?

Like LeBron James, these super athletes certainly have some “genetics” going for them.

It’s too simplistic to say that “fat people are naturally strong.”

When I was a personal trainer, I never saw any potential for such enormous strength in any of my hefty female, or male, clients.

Excelling in the sport of Olympic-style weightlifting requires certain body proportions – regardless of height and how much fat is in one’s body.

For example, arms that are short, relative to the athlete’s height, provide a huge advantage in getting a heavy barbell, that’s on the floor, over one’s head.

If that same woman’s arms grew four inches longer, but everything else remained unchanged, her ability to get the barbell overhead would be a lot more difficult.

Thigh bones that are much shorter than their torso is another mechanical advantage in performing these lifts. 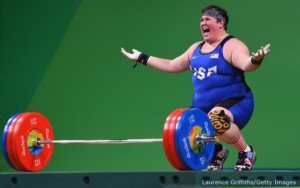 These are young women who are blessed with proportions very suitable to their specific lifts. Combine that with superb coaching and a love for Olympic-style lifting, and what do you get?

Other factors also influence strength, such as ratio of fast-twitch muscle fiber to slow-twitch, and structure of muscle tendon insertions.

But what body positivity influencers and their deluded followers are doing is pointing out these VERY isolated cases of athleticism, genetics and great coaching and extrapolating that many morbidly obese women in the general population are fit, strong and healthy.

I’d like to know how many of those bopo followers — who equate “healthy” with the mere absence of stroke or cancer — have ever even attempted a single deadlift, clean-and-jerk, snatch, bench press or back squat.

How many even do ANY strength training at all? Let alone seriously to get “strong”?!

When it comes to being fit and strong at 300 pounds, we should NOT be talking about the general population of women, the so-called “Walmart fat.”

We should be talking about women such as Sarah Robles and Cheryl Haworth. 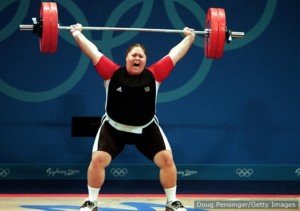 And even then…we have to wonder what their doctors would advise once these athletes retire.

Very heavy competitive powerlifters and weightlifters should NOT be used as a yardstick by the body positive community as to how healthy and fit the average morbidly obese woman is!

If a 300 pound Instagram star insists she’s healthy, fit and strong, there’s a lot of people who’d love to see how much she can deadlift, how fast she can cover 100 meters, and for how long she can walk up flights of stairs before collapsing from exhaustion.

Can she even shovel snow for two minutes straight? Can she run after her preschooler?

Lorra Garrick is a former personal trainer certified through the American Council on Exercise. At Bally Total Fitness she trained women and men of all ages for fat loss, muscle building and fitness.