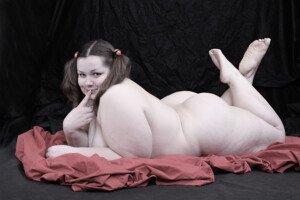 Normalizing harmfully overweight bodies has turned lewd. The message by many “body positive” women is that the most important thing is how sexual her body can be.

It’s one thing to proudly display some knockout plus-size fashions that women would wear in everyday life.

But the promotion of large women flaunting themselves in hardly any clothes – in the name of “body positivity” — sends the message that women are primarily sexual ornaments — primarily body, not brains.

“There’s reason to believe that an over-emphasis on body positivity has done more harm than good,” says Adina Mahali, MSW, a certified mental health professional and founder of Enlightened Reality, an inspirational site that offers various services and therapies.

“When we become too focused on how a person looks, whether for good or for bad, we make it more of an issue than it really is.

“The fixation on being bopo ironically forces people to focus on their bodies more and more instead of prioritizing more fundamental components of their being.

“Whether you love your body or not, you’re still limiting yourself to concentrate on their looks above all else. By doing so, you subconsciously limit yourself to only your looks.”

Women are not supposed to be hailed as ornaments, but this craze of plus size women shimmying and shaking it all — while almost naked — on TikTok, Instagram and Youtube — further calls attention to their bodies rather than their brains, their personality, their insights, their creative juices, their opinions, their I.Q.

There are thousands of images of women in bikinis on the Internet.

These include to show off the bikini itself (not the body in it).

And some overweight women wear bikinis simply because they like bikinis and aren’t out to prove anything.

But all of these reasons are a far cry from a new national trend, encouraged by very overweight body image influencers.

It’s really a whole new animal when body confidence influencers push the idea that a self-conscious woman of large size can take back her power and confidence by flaunting seductively in a bikini, lingerie, or some other scant garment that’s one step away from complete nudity.

In the olden days, there was no flaunting or sharing pictures of this with tens of thousands of strangers.

But today, thanks to Internet technology, it’s becoming the norm for women to post images of themselves almost naked.

Many of their poses and “dances” are just plain lewd and tasteless — the kind you wouldn’t want to show your children or grandmother (though it’s a safe bet that many do).

The message is: You TOO can be a sex object!

But it’s not working. The only normalization that occurs is within the community of plus size women who already have been on this bandwagon — that’s on a road called Objectification of Women.

For those of you unsure of what that means, it means painting women as sex objects no matter what their size.

It shows total lack of class and taste when a woman “dances” around half naked for thousands to view, in the name of body positivity.

This backfires, bringing attention to the woman’s body rather than her brains.

Isn’t this the LAST thing that women should want to be doing?

There are so many ways for a self-conscious, very large woman to build confidence and positivity about her body AND mind.

She should not sink so low as to display her body like an ornament.

This is such a warped message to be sending to the next generation of females.

Adina Mahali, MSW, is a specialist in cognitive behavioral therapy, trauma therapy and other pathways to better mental health.