Can Infertility Cause Dark Discharge Between Periods? 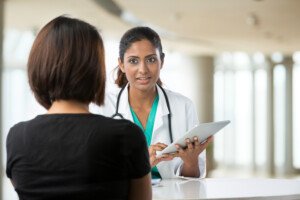 Dark vaginal discharge means the presence of blood, a frightening occurrence since bleeding between periods can mean cancer.

Infertility as a possible cause may spring into the minds of some women.

What else besides uterine and cervical cancer can cause dark discharge between periods?

What appears to be a dark discharge from the vagina has many potential causes other than cancer, including a uterine polyp and hemorrhoidal blood that can make it to the tissue paper and make a woman think it originated from her vagina.

Infertility might be a cause, says Daniel Kort, MD, Practice Director of Neway Fertility, one of NYC’s leading fertility centers specializing in customized and affordable natural fertility treatments.

Dr. Kort explains, “Some women who fail to release an egg (and thus have infertility) have discharge between periods.

“However, many women who do release an egg also have discharge between periods.

“In fact, after ovulation, vaginal discharge will change, becoming thicker and whiter. If there is blood for any other reason, this discharge can be dark.”

But if a woman has infertility, wouldn’t this prevent menstruation?

If a woman is not ovulating (ovary releasing an egg), this means she is infertile. So how could she then have “periods” between which she is seeing a dark discharge?

What she thinks is her period is actually not menstruation, but something called estrogen withdrawal bleeding. It can mimic a period.

Estrogen is required for ovulation. If the levels of estrogen fail to build up enough for this process, ovulation will not occur. The levels of this hormone may then drop dramatically.

This is when estrogen withdrawal bleeding can occur, masquerading as menstruation. This non-menstrual bleeding is also called anovulatory bleeding.

Another cause is if, gradually over time, the uterine lining builds up to a point where it then must be shed. This is called estrogen breakthrough bleeding.

So what, then, might be causing brown or blood-tinged discharge in between these pseudo-periods?

Sinking estrogen levels from periomenopause (and especially postmenopause) can dry out the vaginal tissue and make it more friable when stressed by intercourse or aggressive wiping, leading to minute traces of blood appearing on the toilet paper or panties.

Dark or brown discharge with no explanation requires an exam by a gynecologist to rule out serious causes.