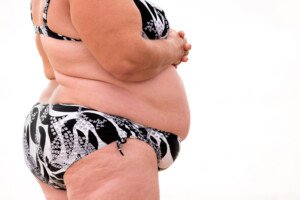 If you’re fat with poor self-esteem, you can cure this by wearing a bikini to the beach. Allison Kimmey

But let’s face it: Years of mental anguish over one’s plus size body is not going to be erased by working up the nerve to wear a bikini in public. Allison Kimmey

First off, whose idea is it to get on the bikini? Did you read this on a body positive influencer’s Facebook or Instagram?

It’s baffling how wearing a bikini in public is somehow considered the blitzing turning point in a sad plus-size woman’s life that will magically open new doors for her.

However, posts by full figured women who purchased a bikini for the first time or have been wearing one for awhile are popping up everywhere. Allison Kimmey 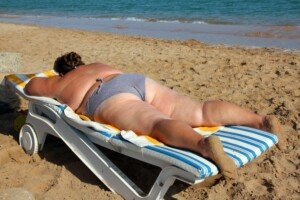 I just don’t see how wearing a bikini in public, after years of being ashamed of one’s obese body, can be a turning point in one’s life.

But if it is, then say so! I don’t see any posts such as, “After I wore a bikini for the first time, I suddenly had the courage to tell off my crooked boss at work, then quit and found a better paying job!”

Okay, So You Finally Wore the Bikini. Allison Kimmey

Will putting on that Band-aid enable you to come up with award winning ideas for the company you work for or stand up to your foaming mother-in-law?

Apparently, the big accomplishment is having the “courage” or “bravery” to wear the thing.

But when you go to the beach in your bikini, don’t you realize that you’re not exactly a pioneer?

You’ll see OTHER plus size women in bikinis too!

Large women wearing bikinis in public is almost as old as the hills. When I was a child I saw obese women in bikinis at Coney Island beach. Like, big deal.

Of course many people will think, “Gee, look at that,” but then their attention will be quickly diverted by something else at the beach that’s a lot more interesting than spending time scrutinizing your oversized body!

You’re not the center of attention at a beach just because you’re plump and wearing a bikini. 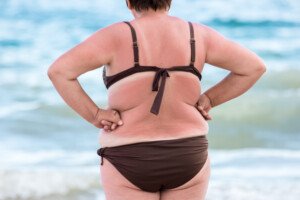 Frankly, nobody cares. They may notice and think, “Gee, I’d never do that,” but so what?

Give ‘em just four seconds and they’ll be looking AWAY from you and back to their crossword puzzle, phone, child, soft pretzel, studying their tan or gazing at the water.

You will be forgotten in seconds.

You will NOT be the topic of discussion at that observer’s dinner party later on.

Maybe the concept of large women wearing bikinis might get a few minutes of conversation, but your name and “amazing confidence” will not be mentioned at that dinner party or at the water cooler next day.

Since when does wearing a bikini in public define a woman’s self-esteem?

Whether or not a woman of large size bares a lot of skin is NOT a measuring tool for her level of self-esteem. 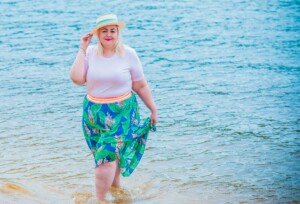 “Plus size women post tons of images of themselves flaunting bikinis, then insist that people should think of them as more than just a body. Weird.”

A morbidly overweight woman who wears a bikini to the beach or swimming pool may still have frightfully low self-confidence in other areas of life where high self-esteem and TRUE bravery count.

Such as terminating an unhealthy relationship!

Wearing a bikini in public doesn’t magically give you the self-esteem to ask your boss for a raise.

Because if this were true, where are all the Instagram posts about backbone development as a byproduct of working up the confidence to wear a bikini?

All I see are posts such as, “I finally did it! I bought a bikini and wore it to the beach!” And then it stops there.

I don’t see any “Wearing a bikini has encouraged me to pursue my master’s degree” or “stand up to my belittling husband and give him a few ultimatums.”

Big deal: You’re big and wore a bikini. I’d like to think that children today will accomplish so much more in life as adults than working up the courage to flaunt a lot of bare skin – REGARDLESS of their body shape or size.

Wear a bikini if somehow it makes you feel liberated.

But remember this: You’ll still awaken the next day no closer to discovering a cure for multiple sclerosis, solving world hunger or standing up to that bully at work.

Posting bikini selfies to Instagram is like a drug fix. The “high” is shortlived, based on compliments from strangers.

The need for the next fix — the next batch of validations from strangers — comes soon after.

This reveals insecurity, not confidence. That’s why the selfie posting continues.

There is just way too much emphasis on this “wear a bikini if you’re fat” movement.

What a sad state we are in if this is how we measure personal achievement!

If you found this article intriguing, you’ll also like:

Barbie Now Has Realistic Body; But What About Her Face?