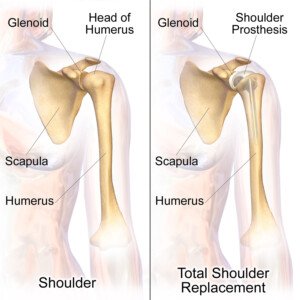 An oddball discovery is that older people experience better results from shoulder replacement surgery than do young patients.

At first, you’d think that the opposite would be true, that the younger people would have more favorable outcomes.

Prior to surgery, younger patients have better shoulder function than do older patients.

But a Henry Ford Hospital study of 365 patients showed that shoulder function and range of motion were more improved in the older patients.

Common sense says that this greater disparity in old vs. young patients (postoperative function vs. preoperative) is due to the fact that older people had a poorer preoperative shoulder to begin with.

And that is precisely the explanation.

However, the younger patients had a greater complication rate following surgery.

“Our study suggests that age does not have a noticeable factor on the final outcome of surgery,” says Kelechi Okoroha, MD, lead author of the study.

It’s osteoarthritis, a wearing down or thinning of the cartilage between the bones.

The younger patient feels that their “new” shoulder could handle more, so they overdo the physical therapy and/or rush back into sports or gym workouts, or neglect precautions and do heavy work around the house such as carrying an air conditioning unit.

Or due to feeling the invincibility of youth (even if they’re middle aged rather than a senior), they don’t take other postop care seriously such as monitoring the surgical wound for infection. This is speculation, of course, but it makes sense.