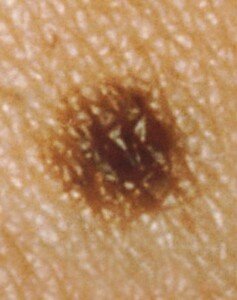 What happens when the latest mole image looks strikingly different than last year’s picture in a serial digital dermoscopy procedure?

I’ve been taking advantage of the technology of serial digital dermoscopy since 2011.

Recently an image taken of one of my moles (the “No. 2” mole) looked strikingly different from the image of it taken in 2011.

I discovered this when I was left alone in the dermoscopy room after the nurse photographed all of my moles.

I was told that the doctor was behind schedule and would be seeing me about the new images in about 20 minutes.

The nurse had left two large images up on the computer screen: No. 2 as it appeared in 2011, and how the mole looked just minutes ago after she had imaged it.

The image she had taken looked de-evolved; much less pigment, as though the mole was in the process of disintegrating.

It didn’t even have the same shape as the one depicted in the 2011 image.

The first five images looked the same—but then that last image…it didn’t even look like the same mole.

How could it have been the same year after year, then suddenly between 2015 and 2016 undergo such a dramatic change?

The doctor came in and explained that the mole looked normal despite the de-evolvement. The reason it looked as it did was because, like many moles eventually, it was beginning to disappear.

She said this is why you don’t see a lot of moles on elderly people.

She pointed out something called melanophages in the 2011 image: tiny darker specks in the mole that indicated it was a relatively new mole back then.

She said that the mole probably first came into existence in around 2006. But that now, it was on its way out.

I found two things odd about this.

First, how is it that a mole begins to disappear after being in existence for only 10 or 11 years?

Right before I was about to ask her these questions, the computer screen went out; the doctor had to leave to get a nurse to reset it.

I waited quite a while, quite unnerved. I wondered if the nurse had accidentally photographed the wrong spot.

Turns out she did! The image was retaken, and the right mole was now on the screen, and the “mole analysis” gave it two scores in the normal range.

Lesson learned: If the latest image of a mole in your serial digital dermoscopy exam looks a lot different than the one taken at the previous exam, make sure it was the RIGHT mole that was photographed in the first place.

Whomever is taking the pictures is human and thus, subject to error and getting things mixed up.

Serial digital dermoscopy is an outstanding technology that uses a computer database to rate moles with a numerical value to indicate if they are in a normal range or “suspicious.”