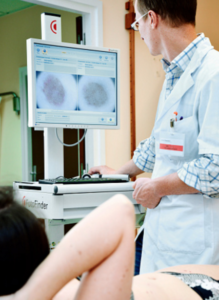 I underwent serial digital dermoscopy at University of Colorado Hospital, and here’s what it’s like.

I finally decided to have serial digital dermoscopy done for melanoma screening, something I’ve been putting off for several years.

If you clicked on this article, you probably already know what serial digital dermoscopy is all about, as far as melanoma detection.

Serial digital dermoscopy is done at only a handful of facilities in the U.S., including at University of Colorado Hospital.

My dermatologist did not authorize the digital dermoscopy because I am not considered high risk for melanoma; thus, I paid out of pocket.

However, I also paid for some peace of mind, as this cutting-edge melanoma-screening technology has been proven to detect melanoma in its earliest stages.

The doctor then decided to have three moles on my back imaged; no others.

Apparently, their digital dermoscopy is mostly for just the back, since this is the hardest-to-view area of the body.

The three moles on my back did not stand out from any of the moles elsewhere on my body (i.e., legs and arms).

However, I can’t view the back ones well, due to their location. Two of these moles are very small.

Apparently, the reason that larger moles on my leg were not included in the imaging was because I can readily inspect them.

After the doctor marked, with ink near them, the moles on my back, I was led to the room next door for the digital dermoscopy.

I stood, back facing a nurse, who was at a computer console. She placed an imaging device to the moles (I couldn’t see the device, of course, but it obviously recorded the image into the computer).

She then showed me the 20-times magnification of each mole on the screen.

What a mole looks like, magnified 20 times, is entirely different than what it looks like to the naked eye.

In fact, the appearance looks a little scary because it is much less exact, less defined, more diffuse, and (in the case of a normal mole) full of spidery-looking configurations that dermatologists refer to as the “network” of a mole’s pigment.

The nurse pointed out that the squiggly lines or network were actually very normal, and that if the image showed instead a more dense, solid mass of brown, it would be concerning.

In the computer system was also a full image of my back.

The images of the three moles, plus the full image of my upper and lower back, will comprise the baseline images, so that 12 months from now, new images of the same areas can be compared: serial digital dermoscopy.

The procedure was brief and after the third mole was imaged, the nurse sprayed cleanser on my back to wipe off the ink. And that was that.

Paying out of pocket is worth the peace of mind that serial digital dermoscopy will bring to “mole-conscious” folks concerned about melanoma.

However, serial digital dermoscopy does not replace monthly home skin exams or the yearly clinical exam.