6 Gym Behaviors that Seem Like Bullying but Are Not 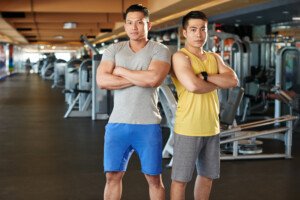 Before you feel that you’ve been bullied at the gym, consider that the “bully” really isn’t, and that there’s just some misinterpretation going on.

With all the publicity these days about bullying, some people may be conditioned to believe they were bullied at the gym, when in fact, nothing of the sort happened.

There’s the school of thought that if a person feels bullied, then they WERE.

But what about the intention of the alleged bully? If that person did not intend to behave like a bully, that certainly counts in this equation.

Gym Behaviors that Seem Like Bullying but Are Not

Equipment Grabbing
The person who “takes” your machine had no idea that you traipsed off for a moment to get a drink of water, or that you’re wandering nearby, re-enacting your difficult set or replaying an argument in your head that you had with your spouse.

You’re near the equipment, but not near enough to get the attention of the guy (or gal) who takes it.

You were not bullied out of your use of that equipment. This has happened to me—on both ends of the spectrum.

I’ve wandered away ever so briefly, only to turn around and see someone using the equipment I was just on. I simply go over there and point that out, and they oblige.

Or, I sit on a machine for my first set, and someone appears and says they’re still using it. I get up and give them back the equipment.

This stuff happens all the time at gyms; it’s par for the course; nobody is being bullied.

Pointing Out Your Indiscretion
If you left puddles of water all over a bench in the locker room, and someone points this out, you are not being bullied.

You SHOULD be called on this. You just puddled up the bench that this person wants to use; their locker is right by it. Why didn’t you wipe it dry?

If you have all your personal belongings spread along a bench, and someone wants a little space and begins gently moving your items, you are not being bullied.

You should know better than to hog the bench, and in fact, the person moving your things might perceive YOU to be something of a bully.

Now granted, a person may behave like a bully when trying to correct these situations, but the correction, in and of itself, does not constitute bullying behavior.

It’s one thing for a gym member to snarl, “Wipe up these puddles or else!” That’s a bully.

But if the gym member simply states, “Excuse me, but could you please wipe your puddles?” that’s not bullying; that’s being gently assertive.

Claiming a Floor Area
Every so often someone claims an area to work out at, peppering it with various pieces of equipment such as a few sets of dumbbells, a mat, a stool and a fitness ball.

This is their area for a while, and there’s nothing wrong with that. They are not trying to be the alpha male or female.

It’s just that their particular routine calls for using multiple pieces of equipment in rapid succession.

Spending a Long Time on Equipment
A 3-5 rep max with the deadlift may take several minutes to recover from so that the exerciser can perform another set with all his or her might.

If they’re doing five such sets, that’s a lot of time using that space—not including the time spent warming up.

Don’t be afraid to ask if you can use the squat portion of the cage while they occupy the floor just outside of it for deadlifts. Don’t assume they’ll bully you away.

Acting Obnoxious or Narcissistic
There’s always a man at the gym with huge muscles who behaves this way (I’m sorry to say this, but I don’t really see any women behaving this way).

He’s not necessarily a bully. Ask him to spot you and he just might eagerly oblige, then compliment you on your effort.

“Flush the Toilet!”
If someone is right behind you and says, “Excuse me, but you didn’t flush the toilet,” they’re not bullying you.

You didn’t flush the toilet, or at least, you didn’t make sure it flushed effectively, and this definitely should be brought to your attention.

I once entered a stall to see a toilet bowl of yellow water and tissue. I saw the woman who had exited. I approached her and pointed out the problem.

She didn’t like that; she was embarrassed but flushed the toilet. Sure, I could have easily flushed it, but she needed to be called on this uncouth behavior.

I didn’t feel like a bully; I felt like I was making a wrong situation right. She’ll surely remember harder next time to make sure that the toilet is thoroughly flushed.

What makes a gym bully may be in the mind of the beholder, and sometimes, what brings out the not-so-diplomatic in people are indiscretions that patrons should not be committing.