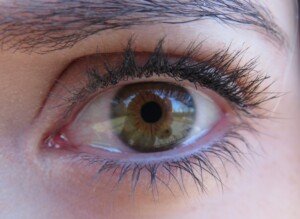 If you have sudden-onset one-eye epiphora, don’t panic, as this may pass after only several days like a light being switched off.

“Epiphora can be from either an occlusion somewhere along the nasolacrimal passageway (easy to test for in the office) or acute dry eye,” says Yuna Rapoport, MD, a board certified ophthalmologist with Manhattan Eye in NYC.

An occlusion is a blockage. The nasolacrimal passageway is the drainage system that links the sinus area to the eyes — which is why the nose runs when people cry.

One evening I became aware that there was moisture collecting on the skin below my inner right eye.

Next day the eye was persistently welled up, and produced three or four full-fledged, clear tears rolling down my cheek during the day.

In between those tears, the eye was in a state of persistent excess wateryness.

There were no other symptoms and no recent history of trauma.

Dry eye can cause excess tearing because the dryness stimulates the tear ducts to overcompensate.

I suspected dry eye and gave it a lot of artificial tears, but it continued to be welled up.

This unilateral epiphora (which means one eye tears or is excessively watery) was building up by the day.

Causes of Sudden Epiphora in One Eye

“Sudden-onset epiphora could be from an acute infection in the nasolacrimal system, from a physical obstruction (like a stone, a punctal plug, foreign body), or from dry eye/surface disease,” says Dr. Rapoport. 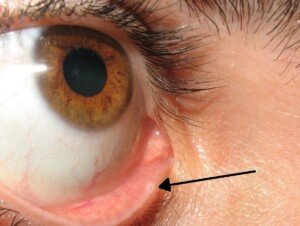 The punctum, where debris could cause an obstruction. Diogo Melo Rocha/CC BY 2.5

Can cancer cause an eye to suddenly tear excessively?

“Cancer would be the last item on my differential diagnosis,” says Dr. Rapoport.

There are many more causes for a gradual onset of an excessively watery eye, vs. a suddenly watery eye.

To be fair, it’ll be pointed out that malignant and benign tumors in the sinuses can cause a gradual onset of epiphora in one eye.

A cancerous obstruction in the nasolacrimal drainage system, too, can trigger excessive tearing in one eye. But again, this would be gradual rather than sudden appearance of tear drops rolling down the cheek.

Paranasal cancer is very rare, and malignant tumors in the lacrimal system are EXTREMELY rare.

On that fifth day in the morning, I made an appointment to see a general practitioner.

The sensation of the welling up in the right eye, prior to leaving for the appointment, seemed to be disappearing, but I figured that was just its occasional remittent nature over the past several days.

But as I waited in the doctor’s office, I was realizing that the eye didn’t feel welled-up at all. There had been no tearing since I had made the appointment.

The doctor couldn’t tell me what was wrong, but she also didn’t think it was an infection.

This sudden one-eye epiphora was simply GONE and never returned.

Eventually I asked an optometrist whom I’d spoken to previously about eyedrops for an unrelated matter what could have caused it.

He said: “a partial obstruction of the punctum.”

The puncta are the holes in the eyelid that drain tears.

“A little strand of mucus further down in the canal, not necessarily at the surface, and it kind of worked its way through,” he said, when I told him that the condition had magically shut off without tapering.

As for corneal abrasion, he said, “Generally you’re going to have some discomfort in the eye, but if it was a very small abrasion, that could cause a little bit of reflex tearing.”

Reassurance: Absence of Other Symptoms

There’s no need to panic if one eye suddenly starts watering with no other symptoms.

Concerning symptoms include vision problems (other than the blurriness caused by the excess water), a bulging eye, swelling, numbness below the eye or near the nose, a stuffy feeling in the nose, nasal discharge and ear pain.

Nevertheless, if epiphora in one eye fails to clear up, you should see an ophthalmologist — even if your medical plan requires that you first see your primary care physician.

Manhattan Eye uses state of the art LASIK technology and modern techniques for a safer and more precise correction surgery, and also provides services covering all aspects of eye health.