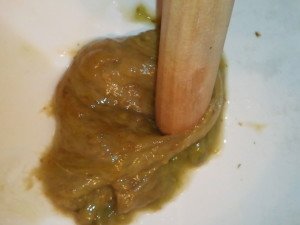 Do your stools look slimy, oily or greasy?

If they appear different lately, you should see a gastroenterologist, since only a doctor can determine for sure what the cause is.

“This can have many causes, including certain infections, as well as small bowel or pancreatic problems.

“Determining the cause often involves taking a detailed history as well as some diagnostic testing.”

“One needs to differentiate oily looking stools and mucous in the stool,” says Dr. Blume.

“One usually malabsorbs fat (this is what makes stools oily) if there is a problem with pancreatic function, such as with chronic pancreatitis, or from problems in the small intestine where fats get absorbed, such as with celiac disease, certain infections, such as Giardiasis, small bowel bacterial overgrowth, or other inflammatory diseases.”

Cause of Golden Yellow Poops