Can a Brain Tumor Cause Your Head to Suddenly Feel Heavy? 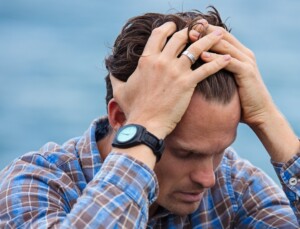 You’re going about your day when suddenly your head feels heavy.

It doesn’t last long and then you feel perfectly normal. Could a brain tumor be the cause?

“Some people report a feeling of ‘heaviness’ in their head.”

A sudden or gradual feeling of heaviness in the head, however, is most likely NOT a brain tumor.

It may have no known cause, and it may just be something that a person has to put up with.

But if it recurs on a regular and especially frequent basis, the heaviness can have a variety of causes. Even if it’s very occasional, a physician may be able to figure out what’s behind it.

Heavy Feeling in Your Head: Possible Causes Other than a Brain Tumor

BPPV: benign paroxysmal positional vertigo. The sudden sensation would come immediately after turning or moving your head, sitting up or lying down – hence the condition’s name.

However, the sufferer would very likely also experience a sensation of the room moving, even very slightly. The symptom ceases when one’s head becomes still.

This condition may come with nausea, and being off-balance when walking, and in severe cases, vomiting.

Treatment is the Epley maneuver.

A feeling of heaviness from a TIA usually affects one side of the body or a single whole limb, rather than something that’s just limited to the head.

Sinus infection or sinusitis. The heaviness or pressure in the head would likely be felt when one bends over, such as to pick something up from the floor, or when they lie down.

There may be a headache already present, and there wouldn’t necessarily be a runny or stuffy nose.

Drop in blood pressure. This can cause a sensation of heaviness in the head, but it would also be accompanied by a faint or dizzy feeling that makes you want to pause in your tracks as the room seems to fade out.

Head cold. This is a cold or “bug” that affects the head, but the symptom does not come on suddenly; it’s gradual, and gradually goes away as the body fights off the infection.

You may also go to bed feeling normal and then awaken with a “funny feeling” in your head due to one of these colds.

If you have continued episodes of a sudden (or gradual onset) heavy feeling in your head – see your physician. There may be a cause other than the ones listed above.

“Any symptoms with sudden onset or that are progressively worsening should be taken seriously and evaluated,” says Dr. Sathi.

Nevertheless, a brain tumor as a possible cause will be at the bottom of the suspect list.