Can a Brain Tumor Cause a Swooshing Noise in the Ear? 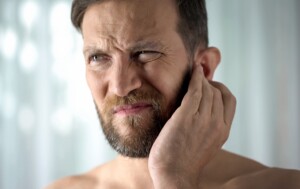 The potential causes of a swooshing noise inside the ear can be deadly.

When someone begins noticing a “whooshing” sound in their ear, a brain tumor is often the first possible cause that comes to their mind.

A tumor is another word for mass. A mass can be malignant or benign. A mass of anything in the body, technically, is a tumor.

This includes birthmarks, which are concentrated masses of pigment cells. If a mass is located in the brain, it’s, of course, a brain tumor.

When people worry about brain tumors, usually their fear is of the cancerous type, rather than a mass of blood vessels – which by definition of “tumor,” is actually a brain tumor if the vascular entanglement is located in the brain.

The more accurate question then, is, Can brain cancer cause a swooshing or whooshing sound in one’s ear?

“Whooshing noises in the head are often caused by vascular lesions such as arteriovenous malformations [AMVs], or fistulas where there is an abnormal/direct connection between the arterial and venous systems,” explains David Poulad, MD, a board certified neurosurgeon with IGEA Brain & Spine who practices in Union, NJ, whose special interests include the surgical treatment of brain tumors.

“Other vascular lesions in the brain may also sound pulsatile, but most commonly patients will describe a whooshing sound,” says Dr. Poulad.

“The sound is formed by the high flow of blood from the arterial system directly to the venous system.”

Brain cancer does not cause a whooshing type of tinnitus (subjective noise in the patient’s ear).

But an AVM can be quite serious and is not to be taken lightly, though to the patient who feared a malignant brain tumor, it would be a small relief to hear this diagnosis.

An untreated AVM can lead to fatal hemorrhaging in the brain.

Another possible cause of a swooshing noise in the ear is a cerebral aneurysm: a bulging blood vessel with weakened inner walls.

If it ruptures, the bleeding may be deadly if not treated ASAP.

Finally, high blood pressure in the brain, of no known origin, can cause a pulsatile tinnitus.

Pulsatile refers to a whooshing, swooshing or thumping sound that occurs in synch with one’s heartbeat and is heard inside the ear.

If you’ve been experiencing what you could describe as a pulsatile, pulsating, swooshing or thumping noise inside or near one or both ears, do not put off seeing your doctor. Make an appointment immediately.

There is a type of brain tumor that CAN cause tinnitus or sounds inside the ear, but patients do not describe these noises as “swooshing” or “whooshing,” nor are they pulsatile in nature.

This type of brain tumor is called an acoustic neuroma.

And…it’s benign, though it can cause permanent hearing loss and ongoing issues with sense of balance, plus if left untreated, can seriously damage the brainstem.