Can a Sudden Heavy Feeling in One Arm Mean a TIA? 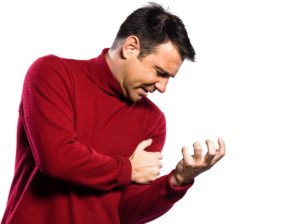 A sudden heavy feeling in one arm has several possible causes. One of them is a TIA or stroke.

You can be anywhere, at any time, when a transient ischemic attack or stroke occurs.

The symptoms depend on what part of the brain is deprived of oxygen by the blood clot (ischemic stroke).

“A sudden heavy feeling in one arm can be a stroke or a TIA and needs further evaluation,” says Atif Zafar, MD, medical director of St. Michaels Hospital in Toronto, Ontario, and former director of the stroke program at University of New Mexico Hospital.

If the clot is cutting off blood flow to the part of the brain that controls arm function, then the symptom can very well manifest as that sudden heavy feeling.

There may also be diminished or clumsy movement of the arm – which will be more apparent if the TIA occurs while the arm is at work.

Other Causes of Sudden Heaviness in One Arm

“It is not uncommon for patients to doze off in their chair with their arm hanging on the side of the arm rest,” continues Dr. Zafar.

“This often causes nerve compression which causes arm heaviness.” This is when the arm “falls asleep,” as the saying goes. This may come with tingling and numbness.

The situation, when caused by body position, begins to resolve once a change in position occurs.

“Reassurance with avoiding similar postures/positions in the future are recommendations for patients presenting with radial nerve compression,” says Dr. Zafar. “It is a benign problem and goes away within hours.

“Carpel tunnel syndrome, which is also a nerve compression, often presents with a heavy feeling,

“However, burning or tingling is often associated with that symptom.

“In patients with whiplash injury or injury to their neck or shoulders, can also present with arm heaviness.

“In these cases other possibilities like brachial plexus injury or cervical cord injury have to be ruled out.”

Should you go to the ER every time one arm suddenly feels heavy?

Context needs to be considered. For example, if you’re young, don’t smoke and are physically fit, and one day you start sensing a heavy feeling in only one arm, this can seem quite worrisome.

But then you remember that the day prior, you slipped on ice and fell backwards on concrete, hitting your head, resulting in a whiplash to your neck, which was sore the following morning.

It’s likely that you suffered a cervical injury as well, affecting the arm. You DO need to see a doctor right away.

You may also awaken in the middle of the night with a heavy arm – that also has some tinging and numbness. But then you realize that it’s been compressed against something.

You release it and move it around, and very quickly it begins feeling normal.

But suppose you’re 55, never exercise, have a bad diet and are overweight. And one day you’re doing kitchen work when suddenly, your left arm feels limp and heavy.

This is very concerning for a TIA or stroke – especially if there are other symptoms such as a similar feeling in the same-side leg.

Even if the situation disappears after only 30 seconds, you should have someone drive you to the ER.

A TIA is a harbinger of a stroke to come in the near future. Initiation of treatment is crucial to prevent this.

“Typically, sudden onset of heaviness in a patient who has risk factors like hypertension, diabetes mellitus, hyperlipidemia, smoking, OSA should be evaluated for stroke or TIA if these patients present in the acute setting,” explains Dr. Zafar.

OSA stands for obstructive sleep apnea – which non-overweight people, including women, can have – contrary to the myth that it’s a “fat man’s disease.” More on OSA.