Is It OK to Give a Young Child a Whistle to Play With? 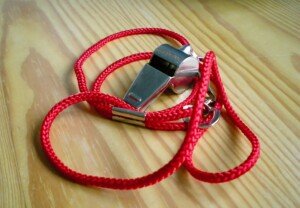 This may seem like a fun harmless thing, but what if your child decides to stand outside among neighboring homes and repeatedly blow the whistle?

So one day I was in my living room when suddenly, I began hearing a whistle – the kind you hear at a sporting event.

I didn’t think much of it – until it kept blowing and blowing. Looking out the window I searched for the source but didn’t see it, but I heard it again.

Then I spotted the source: a girl of about five, maybe six, standing on a boulder across the cul-de-sac, blowing the whistle over and over. Nobody else was in sight.

I thought, What parent gives a young child a whistle to play around with, then sets her loose outside?

When I was a child, there was a metallic whistle in the house, attached to a neck cord.

On only a very occasional basis, I blew it inside the house – once or twice, then put it away in its drawer.

If I had gone outside and began blowing it repeatedly, my mother would not have wasted time ordering me to stop.

If I had refused, she would’ve come out and taken it.

And maybe that’s what the five-year-old girl’s mother eventually did (and if so, she waited too long, because the blowing went on for at least 10 minutes), because finally, I stepped outside to investigate, and the girl was magically gone – and I never heard the whistle ever again.

“Rarely will a parent subject themselves to the torture of giving their own child a whistle,” begins Dr. Tiff Jumaily, MD, a board certified pediatrician with Integrative Pediatrics and Medicine.

However, you know that old saying: Anything is possible.

One time in Walmart I began hearing a distant but loud, piercing whistle. It wasn’t a sports whistle, but it was obviously some kind of instrument that one blows into.

I kept hearing it all over the store. Curiosity got the best of me and I began seeking out the source.

It was never in the same spot, and I knew I was searching for a child blowing into some kind of toy.

Finally I spotted him – about five or six – scampering up and down aisles blowing through a reed-like toy.

Presumably, his parent gave it to him and thought nothing of letting the child disrupt the entire Walmart.

Your Child Is Begging for a Whistle 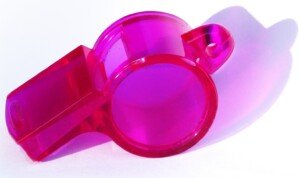 “It is important for children to play in the dirt and feel the earth, to drop things and observe how they fall or bounce, and to bang on objects and hear the different sounds they make.

“A whistle (however annoying) is the same. To a child, they blow silent air into this device — and out comes a shrill sound! So interesting to them!

“The best place to learn this fun skill is outdoors during the day (away from others, ideally).” A hiking trail would be ideal.

“As a parent, I would let my child explore the sound the whistle makes for a few minutes, and then try to redirect them to another game, for my sanity and that of my neighbors.”

If your child can’t get enough of a standard whistle, or any whistle toy for that matter, this may be a sign that they have potential to do very well with a wind musical instrument. You’ll want to seriously explore that possibility.