Why Are Kids’ Toys that Mimic Adult’s Tools Brightly Colored? 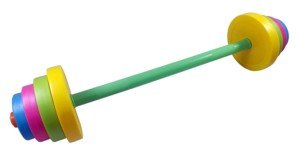 Toy shovels, brooms, stoves and trucks are red, blue, purple, green and yellow, yet are somehow supposed to make the young child feel as though they are doing things “just like a grownup.”

But really now, will that four-year-old feel like a grownup or feel like Daddy when he’s lifting over his head that colorful barbell? 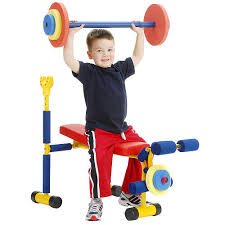 Is he old enough to know that the bright colors make it ANYTHING BUT an imitation of the grey-toned grownup version?

Granted, the small dumbbells in fitness classrooms come in every color imaginable, but I’m talking about bars and plates.

Preschoolers are very observant. They know what the colors of real trucks, stoves, shovels, brooms and lawnmowers are. 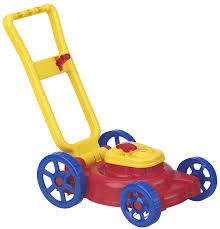 So if you give your preschooler that colorful toy lawnmower, will he detect that this isn’t the real thing simply due to its outrageous colors that make it look nothing like Dad’s “grownup” lawnmower in the garage?

Seems to me that a child will feel more “grown up” or like a “big boy” or “big girl” if they are handed a toy that matches the colors of the real grownup version. 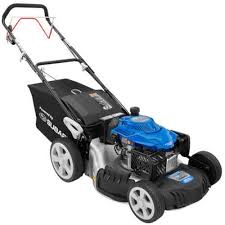 I’d rather buy this realistically colored toy for my preschooler than the gaudy colored one above this one!

I have to believe that toy companies give bright colors to the plastic miniature versions to attract the PARENTS who are shopping for toys!

Think about that. What would grab your attention when shopping for a toy dump truck?

One in the package that’s shades of brown, grey and tan? Or one that’s blazing yellow, red, blue and purple?

Have the toy manufacturers actually done research into which toys attract children more?

The common belief is that many different strong colors attract preschoolers and slightly older kids.

The toy maker knows this, and the motivation to create brightly multi-colored toys – even if they’re shovels, vacuum cleaners and plastic weightlifting sets – is based on what will be taken off the store shelf and purchased, NOT what most makes the young child feel like an adult when playing with the item at home.

Certainly, if you hand your three-year-old son a toy dump truck or lawnmower that’s colored like the real thing, they’d revel in playing with it, feeling like a grownup – more so than if the object was purple, green, red and yellow!

Young children who are fascinated by garbage trucks and lawnmowers know very well what color the real thing is.

Yes, some real dump trucks have red, blue, yellow or orange cabs, but the rest of the vehicle is typically white, tan/brown, grey or black.

You give them one that’s brightly multi-colored, and the novelty may wear off pretty quickly. 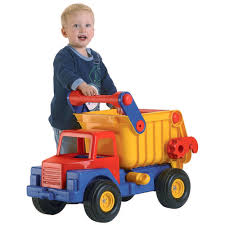 That little boy who wants to imitate Dad’s weightlifting is old enough to know that his plastic red, purple and green barbell and neon-colored spongy plates hardly resemble Dad’s grey bar with the dark grey or black plates.

I had a toy when I was a preschooler that was one of those ridiculous color combinations, something like yellow, green, purple and orange.

I don’t recall what it was, other than it was a scaled-down version of a tool or device that adults use.

Even though I was preschool age, I was able to recognize that it was a poor mimicker of the real thing – due to its color scheme.

At age four I knew that it was NOT supposed to be these colors, and I didn’t like the toy because of that. It didn’t make me feel like I had the real thing.

I wanted one with grownup colors. I’m sure I’m not the only preschooler who’s ever been aware of this marketing ploy, though at the time, I didn’t know it was a marketing ploy to get parents to snatch the item off the store shelves.

Though again, kids in shopping carts tend to notice bright colors first, but once they’re home with their new scaled-down version of an adult’s device, how long before they catch on that its color is a poor imitation of the real thing?

When I was five or six I had a toy car that was made of heavier material that I could push and it would sail across a room’s carpet.

It was WHITE with black and silver wheels and I loved it. It looked more like a real car than a toy.

And that’s what young children and preschoolers want: Something that looks like the real thing.

And color, despite the plastic construction, goes a long way in making something seem real.

Some toys actually do mimic the real thing in terms of color, but they’re the exception. Which play kitchen below would make a little girl feel more grown up? 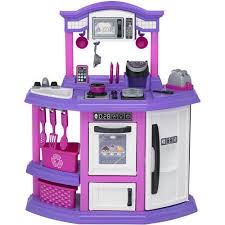 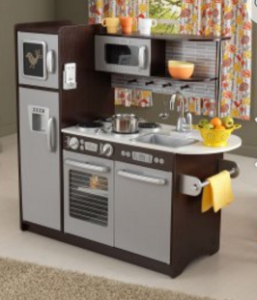 According to an article on whatwizewomenwant.com written by Dr. Daria M. Brezinski, a psychologist, young children’s toys should not be of bright multiple colors.

“The more extreme from ‘nature’ the toy, the less value it has in play,” says Dr. Brezinski.

“Simple, natural materials with earth tones and earthy materials are all characteristics that develop brain, eye-hand coordination, heart, imagination and joy of expression.”

A two-year-old may not be fooled by the purple and yellow plastic hammer, but a four-year-old knows full well that Dad’s coveted assortment of hammers comes in only wood brown and metallic grey!

Even toy typewriters (sold many years ago) were brightly colored! As a five-year-old I wasn’t fooled! Looked nothing like my father’s typewriter and thus I quickly lost interest in this toy!