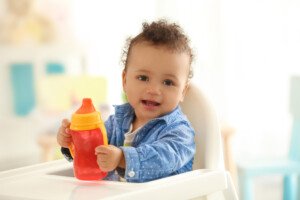 Thud! Your toddler did it again: Threw her big sippy cup to the floor. You pick it up, place it on her tray and she repeats. Here’s how to stop it.

This may seem like a really easy problem to solve, but there are parents who just don’t know what to do.

There are also parents who are actually okay with this behavior; it doesn’t bother them to just lean over and retrieve the sippy cup and put it back within reach of their toddler.

A big sippy cup (the kind that looks like a bottle) that’s fairly full, and deliberately thrown downward by even a toddler, can make quite the thud.

“Toddlers can throw bottles for similar reasons as throwing food: for attention,” says Dr. Tiff Jumaily, MD, a board certified pediatrician with Integrative Pediatrics and Medicine.

The explanation of for attention is very easy to believe; why else would a two-year-old do this?

One mother said she thought it was because the bottle kept slipping from her daughter’s tiny hands.

However, companies make sure to design “cups” or bottles that are easy for little hands to grasp onto.

Furthermore, the parent should be able to tell the difference between a deliberately thrown cup and a slipped cup.

But just to be fair, let’s say that the bottle IS difficult to hold onto. There are two solutions.

#1, try a lighter, more grasp-friendly sippy cup — one that looks like a cup, not a bottle.

#2, forget the sippy (they can harbor a lot of bacteria) and have her drink from an open cup. If she makes a mess, try a straw.

“When a parent gives the thrown bottle back right away each time it is tossed to the floor, the toddler might see it as a game and continue; loving the attention and control of their parent,” explains Dr. Jumaily.

“I recommend that the parent pick up the bottle and place it out of reach of the toddler, telling them that when the bottle is thrown, it means they are done.

“If the child protests and wants to continue drinking, give the bottle back, with the caveat that ‘when they throw the bottle, the bottle will be taken away.’

“Toddlers have amazing comprehension and will be able to understand.”

If a parent continues to let the toddler get away with this behavior – that is, doing nothing other than just repeatedly retrieving the cup, saying nothing and putting it back on the food tray – then other family members certainly wouldn’t be in left field to conclude that the supervising parent is enjoying it as much as the toddler.