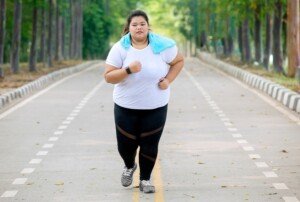 Here are 8 ways a plus size woman can beat the anxiety or fear of jogging outside.

Some plus size women don’t want to jog outdoors because they anticipate heckling from motorists passing by, or silent staring from anyone inside their homes who just might happen to be glancing through a window.

But there’s also anyone who’s outside including other joggers with trim bodies, and even children playing.

The very overweight woman may feel too self-conscious to be seen jogging.

How to Get Past the Fear and Self-Consciousness

Here are some facts to keep in mind. Once you realize these facts, the idea of going outside in the fresh air and doing your jog will become  much more inviting.

First off, hecklers will never etch your face into their memory.

Suppose a car full of teens yells out things as they pass you by.

Guaranteed: If they were standing in the same line as you at the gas station next day, they would never recognize your face — nor you theirs, for that matter.

They would not even be able to describe your face to a sketch artist only minutes after seeing you on your jog.

They weren’t studying your facial features as they passed by, and this should be reassuring because it guarantees they won’t recognize you in another setting.

And what are the odds you’ll ever encounter them again anyways?

Second, remind yourself what you were doing that invited the heckling.

You were jogging. Jogging is the right thing to do. There is nothing embarrassing about running, even if you’re a novice who must do it very slowly. 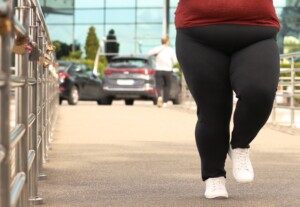 You’re still a lot faster than anyone who, at the same time, is draped on a couch watching TV.

Count your blessings that you can jog at all, and in time, you’ll get faster.

Also, it’s is extremely unlikely that anyone who’d jeer at a jogger is himself a fitness enthusiast.

Though it’s possible that teens and young adults who yell insults to the obese runner may very well be athletes themselves, more likely than not is that they are couch potatoes who’d get breathless just trotting 100 meters.

Third, people on their porch watching you will watch anything that goes by.

That’s probably why they’re sitting on their porch in the first place. If you weighed 120 pounds you’d still feel their eyes following you.

No matter what a jogger looks like, people relaxing on their porch are going to watch that jogger. Guaranteed.

#5: Other people staring aren’t necessarily staring out of disdain.

Why rule out the possibility that they are watching you out of admiration?

Maybe they’re thinking, “Gee, if she can jog, what’s my excuse for not exercising?”

One tactic that I strongly advise against, for overweight women who are reluctant to take jogging outdoors, is to wear a headset to block out the name-calling.

Keep your ears freed up, because you need to hear what’s going on in your environment in the name of safety.

#6: Try to find an exercise partner. Though running with a partner or even several people won’t guarantee silencing the jerks in the world, it will have a diffusing effect if you do hear nasty comments.

#7: Drive to a park where there is a path for joggers and walkers, and exercise there.

If you must drive 25 minutes to get there, it’s worth it. Spend some quality time on the path and just enjoy the outdoors.

#8: Keep reminding yourself that jogging will help you lose weight and improve fitness and heart health.

Whether overweight or not, a woman will always encounter total jerks; it’s just part of life.

Tell yourself you will not allow an idiot to live inside your head rent free.

Jogging is one of the best things that the plus size woman can do for her body and mind.