My Autistic Resting Bitch Face Is NONE of Your Business 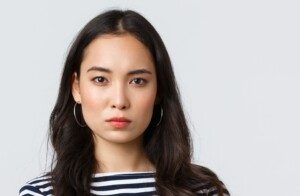 As an autistic woman I don’t owe a stranger a neurotypical face. By the same token, an NT woman with a serious face doesn’t owe strangers a smile, either.

Now, this isn’t to say I never show emotion, smile or get an excited look on my face. I most certainly do at times!

But I’m sure that people would agree that my face doesn’t light up as much as it should, or to put another way, it’s often too matter-of-fact for the situation at hand.

Then again, autistic people are fully capable of showing delight on their faces.

For instance if I see one of my special interests in public, my eyes get big and my face probably looks like a child’s who was just told they could have all the candy they want in a candy store.

If I’m eating out-of-this-world chocolate cake, anyone in the room will tell I’m in a state of pure bliss just by looking at my face as I chew and swallow.

But did you notice something peculiar about all of my examples of when my face shows emotion?

NONE of the examples involve making a friendly connection with another human. Of the six examples, four involve the absence of face-to-face interaction.

The fifth involves speaking to another person, but not connecting with them.

The sixth pertains to asserting dominance, complaining about poor customer service or trying to set a jerk in his or her place — which are all circumstances omitting any attempts to bond or connect socially.

You can deduce from this that in casual, typical, routine social environments, as well as in the realm of day-to-day living, my face is neutral — or as some might say, in resting bitch mode.

Of course, I’ll be grinning ear to ear when I tell the following joke at my next meetup for autistic adults: “What two words should you never say to an autistic person?”

I won’t be able to hold a straight face repeating this meme that I found on an autism acceptance Facebook account.

Anyways, I’ve been questioned on numerous occasions why I didn’t seem “happy,” or why I seemed to be “frowning” or “looking upset” or “mad.”

One of my sisters one day said with disdain, “You never smile.”

In ninth or tenth grade art class, the teacher had a habit of saying out loud to me, “You always look so serious.” She’d literally say this out of the blue.

This was highly inappropriate and unprofessional, putting an autistic teen on the spot in the presence of other classmates.

These days, such a teacher would be, or should be, given a good speaking-to by the principal about respecting the variety among human beings.

At 16 my first job was working behind the jewelry counter of a retail store. I wore a fake smile all day — even when removing price tags, stamping on new price tags and stocking merchandise.

I thought I had to, being my first job and not wanting to get fired for not looking pleasant enough. I wondered if the forced smiling made me look weird. It sure made me feel weird.

I’ve been around people who were all laughing at something that I didn’t think was funny.

But strangely, if I did think something was funny, I didn’t laugh; I maintained a neutral expression (and still do most of the time) — not on purpose, but “on natural.”

I’ve sat through speeches at weddings with little facial expression. I can sit through a sitcom — that I actually think is really funny — with a dead-serious face.

However, I one day viewed a YouTube video about eye contact that had me grinning for much of it; it was hilarious.

I can easily perceive or process that something is amusing, but my face won’t always express it. Is this an autistic trait? Probably.

I’m certainly not trying to suppress facial expression on purpose, especially when I’m by myself. Instead, the neutral or “resting bitch face” is often just my natural.

What makes my face emote quite a bit is when I reminisce on hilarious things that have happened over the years involving my parents.

For example, my mother used to watch “Walker: Texas Ranger.” I never did — unless I was at my parents’ house when this show was on. I had no choice but to view it if I wanted to hang with my parents.

One evening, as with many, my mother turned “Walker” on and we began watching.

Within a minute I realized we’d seen the episode before, so I said, “You’ve seen this one,” hoping she’d change the channel.

My mother insisted she had not. I said, “Yes you have.” Again, she insisted otherwise.

I then said, “I know you’ve seen this episode because I saw it, and the only time I watch this is when I’m HERE!” We both laughed. I make a big smile whenever I replay this dialogue in my head.

Then there was the time I learned that the pepper spray, that had been in my rucksack that was in my parents’ front hall closet, had accidentally gone off within the past several days — due to the pungent odor inside the closet and the moisture inside the rucksack.

I mentioned this to them. Apparently, the fumes had escaped the closet because my father then blurted with an anger that I thought was amusing, “No WONDER my eyes have been burning the past few days! I was thinking of calling a doctor!”

To this day, I can’t think about this without a face full of expression and some chuckling.

But put me in a social situation such as a bunch of NTs congregated for an event — and people will think I’m too serious or expressionless. I call it my Vulcan demeanor. I don’t try to be. It’s just the way my face naturally rests under those circumstances.

Likewise, during “jump scare” scenes in movies that I never saw coming, my face has always remained expressionless.

For example, I never budged when the head popped out from under the boat in “Jaws,” (the whole audience screamed) or when the shark burst out of the water that made Brody say, “We’re gonna need a bigger boat” (more screaming).

No scene in the “Alien” franchise, the original “Halloween” or any of the “Chucky” movies ever made me flinch.

One time a small snake fell from the top of an outside door to my townhome’s storage room onto my hand as I tried to unlock the door. No facial expression. No shriek; not even a gasp. An autistic superpower? Perhaps!

NT women can also have a resting bitch face, but this is likely much more prevalent in autistic women who aren’t masking (trying to pass as NT).

But whether NT or neurodivergent, women hate when they’re told to smile or otherwise called out on their facial expression — especially by total strangers in a store or on the street.

If you’re a man, my advice to you is this: Next time you see a woman with the so-called resting bitch face – and she’s a stranger or someone you hardly know – don’t make any comment about it.

Don’t tell her to smile. Frankly, it’s none of your business why her face is “too serious.”

She might be having a crummy day. She might’ve just learned her dog needs expensive surgery or that she needs a root canal. She might be waiting for biopsy results. She might be autistic. Mind your own business.