Managing Eye Contact when Passing Strangers on the Street 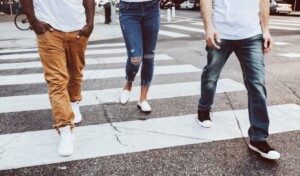 Don’t know what to do with your eyes as a stranger walks your way on a sidewalk? Here are simple solutions; no need to keep wondering anymore.

Upon reading a few threads in online communities, I’ve found that some people feel it’s necessary to make eye contact with a stranger who’s walking towards them from the opposite direction — on a public street or in a building corridor.

For some individuals, making this kind of eye contact with a stranger brings with it a host of questions, not to mention considerable awkwardness and feeling ill-at-ease.

Comfort with stranger eye contact as one passes by varies from one person to the next. Numerous factors influence this comfort level.

These include the type of neighborhood, presence or not of other people, whether or not it’s nighttime, and the psychological makeup or social skills of the individual.

For those for which eye contact with people they’re interacting with is no big deal, direct gaze with the stranger coming their way – with whom they don’t anticipate any interaction — may seem like a mandatory requirement in our Western society.

As the distance closes between two strangers, when does one make eye contact?

Several members of the online community believed it was necessary to make brief eye contact with a stranger at some point as the distance between them shortened.

One conundrum is when to first make eye contact: When they’re about 20 feet away? Or do you start it from a long distance away?

Do you lock onto it for a second (two seconds? three seconds?) or shift away, then return it?

And when do you return it? Is this determined by distance or seconds?

And do you keep shifting away and returning it until you get really close and then hold it directly at that point? 10 feet away? Or right as you pass…or WHAT?

For some people, this is a LOT to process. In fact, the demographics that would seemingly have the most challenges in this area are those with social anxiety, ADHD or autism spectrum disorder.

However, one may feel that they have none of these conditions and still find eye contact when passing strangers to be an awkward occurrence.

And then there’s how long to maintain it: One second? Several? Or keep holding it till the person passes you?

As I read through the comments, I kept thinking, “Why does anyone feel they must make eye contact with a total stranger whom they’ll probably never see ever again?”

The Social Rule for Eye Contact when Passing Strangers

IS there a “social rule” that dictates that you must meet a stranger’s eyes when passing outdoors or in a building corridor? I’m not aware of one.

Just a reminder: This is about strangers passing each other, rather than you see your boss up ahead who just happens to be walking your way.

But you don’t have to make eye contact with strangers with whom you’re not even interacting.

It doesn’t matter if you’re neurotypical, autistic, ADHD, PTSD or are struggling with the discomfort of new contact lenses.

There simply is no rule that strangers must meet eyes when passing each other on a busy or isolated sidewalk or inside a building corridor.

I’m an officially diagnosed autistic. Perhaps this is the reason I’ve always had this built-in awkwardness at the idea of making a direct gaze with strangers for whom no interaction is anticipated — outside of situations where I feel a need to assert some command and show of awareness of my surroundings.

Certainly, if I intend on speaking to the stranger up ahead who’s coming closer to me, I’m going to give eye contact.

An example would be noticing that the woman coming my way has a giant long ponytail slung over the front of her body.

Damn, I’ll want to compliment her and express my awe. Of course I’ll give some eye contact – to establish a pleasant connection based on her ponytail.

But to just routinely yield direct gaze for no known reason? I was never into that, and I gather that even some non-autistic people feel the same way.

One commenter in a thread, who had autism, said she had no problems with day-to-day eye contact as the situation calls for, such as with the clerk behind a bakery counter, the intake clerk at the medical clinic or clerk at the UPS Store, the nurse taking her blood pressure, being introduced to someone on the job, plus people she regularly interacts with.

But then she explained there was a big problem with making eye contact with strangers sharing the same sidewalk as they passed. But she did it anyway.

In my case, the awkwardness stems from the idea that eye contact with a passing stranger kind of “lets them into” my private world, if that makes any sense. It’s a connection that I don’t want.

I don’t believe this is exclusively an autistic thing, though it makes sense that this perception is far more prevalent among autistic people than in neurotypicals.

Why not just completely ignore the stranger?

For all you know, they have a lot on their minds and probably don’t care to make eye contact with you anyways, even if they’re neurotypical.

Just because the vast majority of people are NT doesn’t mean they’re all gung-ho on meeting the eyes of passing strangers.

If, on the other hand, they’re a very gregarious NT who’s “never met a stranger,” and they enjoy making eye contact with every stranger they pass — well gee, you’re not responsible for appeasing their need to make eye contact.

When it comes to passing strangers – a very fleeting moment in time? It’s okay to avoid eye contact.

You shouldn’t feel you “have to.” You’ll never see that person again. If you do, neither of you will likely remember, “Hey, three weeks ago, I passed that person on the sidewalk of Third Avenue.”

Now if they compliment you on your outfit or ask where a nearby street is, that’s a different story. Do what feels comfortable for yourself.

But again, this article focuses on dead silence as you approach and as you pass each other. Tell yourself it’s okay to keep your eyes straight ahead.

Don’t forget to always be mindful of trip-and-fall hazards. When walking anywhere, you should be aware of where your feet are going.

What works best for me is to scan the ground ahead of myself rather than right below my feet.

Once I see that the path is clear of debris, I keep my eyes straight ahead but also looking about. This way, my head isn’t lowered as I’m walking around in public.

A lowered head is an invitation to crime.

You never want to be seen with your head consistently lowered, as this can make an unsavory character think you’re oblivious, submissive or vulnerable — which are the very traits he’s seeking for his next victim of harassment/bullying, mugging or sexual assault.

It’s possible to keep the eyes “straight ahead” while also weaving in scanning the ground to ensure you don’t trip on something.

And just because a stranger is coming your way doesn’t mean you need to interrupt this tactic. That stranger doesn’t own the sidewalk. It’s a public sidewalk, free for you to avoid eye contact.

However, don’t look down as you pass, as this will convey vulnerability. Keep the eyes straight ahead to convey confidence, self-assuredness and alertness to that stranger.

The only time you should make eye contact — in the absence of an interaction — is to exude control of your surroundings.

For example, if an average-looking woman or elderly man is coming your way, there’s no need to assert authority.

But if it’s a younger/middle-aged man — and especially if nobody else is around — then a one-second eye contact (not hard) will let him know you feel in charge and are not easily frightened.

With that said, unless I feel a need to assert dominance, I’ll just walk smack past people without eye contact — but with my head up. You shouldn’t feel obligated to breach your comfort zone — even if you’re a neurotypical.

My recommendations aren’t meant to be the gospel; they’re only guidelines for people who are feeling the conundrum of eye contact with strangers passing on a street or inside a building corridor.

By making the decision to keep your eyes ahead (while mixing this with scanning the sidewalk or floor ahead to avoid a trip-and-fall), you’ll completely eliminate the hassle of the whens and how longs.