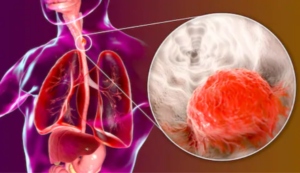 How long can an esophageal cancer be growing inside you before it can be detected?

The answer is frightening.

Esophageal cancer has a five-year survival rate of around 19 percent, according to the National Cancer Institute Surveillance and Epidemiological End Results Program.

It’s one of the bleakest malignant diseases out there.

What makes it even more frightening is that it can produce symptoms that are caused by benign conditions such as acid reflux disease and the more serious but still non-malignant peptic ulcer.

People with the symptoms of heartburn, a feeling of something stuck in their chest, and discomfort in their chest upon swallowing food or liquids, may wonder if they have esophageal cancer – especially when taking heartburn pills doesn’t bring relief.

More severe symptoms include regurgitating chunks of food and a sensation of choking on meat, bread and other similarly-textured foods; they come back up.

“There are no data to go on,” says Alex Little, MD, a thoracic surgeon with a special interest in esophageal and lung cancer, and clinical professor at the University of Arizona.

Dr. Little explains, “Patients have no symptoms until the tumors are large enough to at least partially block the passage of food.

“Many then begin to substitute softer foods for meat and other firmer foods. This is not always a conscious action.

“This works for a while because the part of the esophagus that’s not involved by the cancer can distend and let some things through.

“When they see a physician, the difficulty swallowing — dysphagia — is not always taken seriously.

“Eventually (weeks to months) a barium swallow X-ray (called an UGI for upper gastrointestinal study) or endoscopy finds the tumor obstructing the esophagus.

“I speculate (don’t call it a hunch) a cancer could be enlarging but undetected for a few months to perhaps a year or so.” 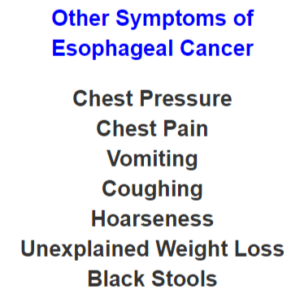