Someone on reddit.com commented that “many” of the people on “My 600 Pound Life” were molested as kids, yet at the same time, most such victims do not become extremely morbidly obese.

This person cryptically implied that perhaps there was another issue at play: some kind of inherent lack of control or even gluttony, and that perhaps the sexual abuse was either coincidental or only played a contributory role.

#1      Is it at all possible for a human being, who was repeatedly molested as a child, to experience an adulthood free of this monumental cross to bear?

It may seem that some survivors of incest or other sexual assault in youth somehow rose completely above all of the trauma, as evidenced by a very successful adulthood.

In the case of “My 600 Pound Life,” the victim usually explains that they kept silent about the abuse while it went on for years.

Or, if they DID tell someone, that person – usually a parent – didn’t do much about the situation.

Or, if the parent DID end the abuse, the parent failed to help the traumatized child process the experiences in a constructive way.

Essentially, it’s not uncommon for a patient on “My 600 Pound Life” – as an adult – to reveal for the first time to a parent the childhood sexual abuse.

#2      How is it NOT possible to carry the cross of repeated childhood molestation into adulthood? 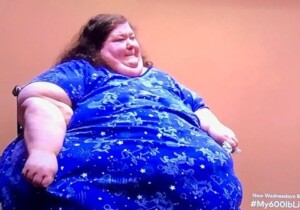 There are many ways the cross can be carried. Becoming 600 pounds is one of them. Some victims grow up to struggle with addictions to alcohol or drugs.

These four types of demons are not visible! Cutters can cover their cuts, and bulimics usually are of a normal body weight.

Need I mention that the clean-cut person who works beside you can be a functioning alcoholic or drug addict?

Why don’t most victims of sexual abuse in childhood grow up to become alcoholics or cocaine addicts?

Why don’t most grow up to become abusers themselves?

The answer: For nearly the same reason that most don’t grow up to become candidates for “My 600 Pound Life.”

For instance, the alcoholic, by chance, never had the stomach capacity to overeat enough to become even moderately obese. But he was around heavy drinkers growing up.

There may also be the liquor-free, drug-free, 170 pound vegetarian who jogs five miles a day who grew up repeatedly molested by a babysitter and uncle.

He got his college degree, holds a full-time management job, and has a wife and two kids. He has it together, right?

Well…he also has a side job: as a piano instructor to young children. He molests some of the boys. Or, he’s a high school assistant gymnastics coach and fondles some of the athletes.

There are SO many ways for the demons of childhood sexual violation to manifest in adulthood.

It’s easy to believe that childhood victims, who completely “turned it around” in adulthood, had several advantages over those who grew up to become the so-called train wrecks.

• The victim reports the abuse early on, like my niece did when she was five and fondled by a 14-year-old second cousin. She ran from the room after the first (and last) incident and told her parents.

• Emotionally supportive family who doesn’t make the victim feel at fault or ashamed.

• Regaining some power by testifying in court against the perpetrator and knowing that the predator will be behind bars for a very long time.

The people on “My 600 Pound Life” didn’t have these advantages. Instead, their coping mechanism was to pile on the pounds.