Can a Man Help a Woman Run Faster by Holding Her Hand? 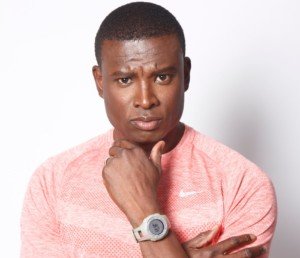 How many times have you seen on TV or in the movies a man and woman running away from danger, and he’s holding her hand every step of the way?

Sometimes, these silly scenes take place in the woods where the terrain is erratic.

This scene – a man holding tight to a woman’s hand as they run for their lives – has been repeated countless times in crime dramas and movies – for decades.

An extreme example is the title sequence for the 1968-1973 TV crime series “The Mod Squad,” in which the two male leads are on either side of the female lead, clutching the daylights out of her, as the trio runs towards the viewer.

I guess back in those days, it was unthinkable to show a woman, even an undercover detective, running without the help of a man.

I wonder how many people actually do believe that a woman can run faster than her natural max speed if a faster man is holding her hand.

Nobody Runs Faster if Someone Is Holding Their Hand

Both runners, regardless of gender, will be slowed down by this cumbersome tactic.

In “The Mod Squad,” the trio is significantly slowed down because they’re all linked to each other. All three characters are fatigued prior to linking up, but that’s beside the point. It’s still insulting. 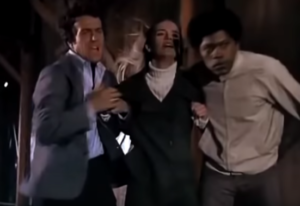 In a 2019 episode of “Law and Order SVU,” the middle age Marissa Hargitay’s character of Olivia Benson is chasing after a suspect, but quickly loses steam and stops with exhaustion, hands on knees, heavily panting and looking nauseous as he gets away.

I’ve seen a lot of “cop shows” and have never witnessed one in which a male detective who gives chase poops out so badly. They may lose the bad guy, but only because the bad guy ran like an NCAA track star.

This is a double standard because even many teen girls can cover 100 meters in under 14 seconds – which a lot of average, typical men can’t do.

One might argue that maybe Marissa Hargitay wasn’t fit enough, but if this were the case, why didn’t the director hire a stuntwoman to do a distant-shot run, or perhaps the double could have been filmed from behind?

As for the reality that a middle age detective can run like the wind, ever see “TJ Hooker” starring the then-middle age William Shatner?

You won’t see HIM pooping out (whether it’s actually William Shatner or a stunt double).

Yet for “SVU,” it was unthinkable to have a female detective succeed at a hard sprint.

In short, Hollywood just doesn’t like to have women skillfully running — unless she’s a Marvel superhero.

The Handholding Is Inefficient

If someone who can run 15 mph is holding your hand, and your top speed is 12 mph, your partner will be forced to go at YOUR speed, likely slower; not the other way around.

But if he tries to reach his top speed of 15 mph while gripping your hand very hard … guess what: You’ll be yanked to the ground and separated from him because your body can’t exceed 12 mph.

The Explanation Is Simple

The human body needs two pumping arms to achieve a full-out sprint or even a fast run.

If one arm is locked up because its hand is joined to another person’s hand, you just destroyed the required gait mechanics for your fastest running.

In addition, your body needs to be free in order to maximize lower extremity ambulation.

This is not possible if one hand is joined to another.

This will alter your hip movement, stride and foot-strike, slowing you down.

If two athletes train to run efficiently while holding hands, they can learn to run in smooth unison, but the speed will be that of the slower runner’s.

In a crisis situation in a movie, the pair is running (not sprinting) through the woods or streets, hampered by their joined hands. Separate them in real life, and they’ll BOTH go faster.

The best way to get away from danger is for a man and woman to run separately!

Again, it’s impossible to run faster than what your current level of training and anatomy allow for, no matter how agile or fast your leader is.

These scenes are laughable, but I guess they create more dynamic drama than if the couple were running separately.

If you have to run from danger, don’t even let an Olympic sprinter take your hand, as this will slow you down – and possibly make you fall flat on your face.

Think of It this Way

If you still believe that a man can make a woman run faster by holding her hand, then imagine that your top speed is 12 mph.

You’re standing next to a motorized scooter with a handle about waist height that you’re holding tightly to.

The scooter takes off and accelerates. Hanging on will force your gait to skewer, causing you to let go – or fall forward first if you’re not coordinated.

What if your hand is bound to the handle?

As the scooter accelerates, there will be a point at which your hips and legs will not be able to keep up, and you’ll be dragged.

If a man and woman’s hands are handcuffed, and he’s the faster runner and tries to accelerate beyond her maximal speed, she’ll stumble and fall, possibly taking him with her.

In order to prevent this, he’d have to run at her speed, and likely a few mph slower, due to the unnatural gait caused by the attached hands.

If you’re a jogger – male or female — it’s important to mix your workouts with brief sprints to develop your capacity to run for your life.

You just never know when this ability will be needed.