Holding on Treadmill Side Rails while Running: Bad Idea

Medically reviewed by D'Wan Carpenter, DO 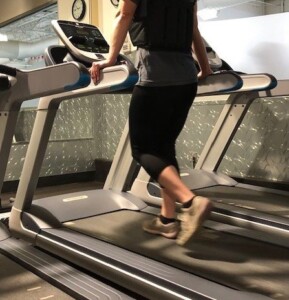 Putting your hands on the side rails of a treadmill while running or jogging will sabotage your efforts and waste your time.

If you hold onto the side rails of the treadmill while doing your running, you’ll want to seriously rethink this bad habit.

When I was a personal trainer people would tell me they need to hold on “for balance” or to “keep from falling off.”

One man, around 60, told me he did it to keep steady. The irony was that he’d set the speed at 6 mph!

This is pretty fast for someone who feels unsteady!

He’d been going to the gym for years, holding onto the treadmill’s side rails and “running” 6 mph – and during that entire time, his body remained the same chubby form.

If this sounds like you—locked in the same state, same body weight—despite months or years of running on a treadmill—and you’ve been holding onto the side rails (or the front bar, or the console), then here’s what you should do:

LET GO. If you think you’ll fly off, this means that the speed you’ve been using is way too fast.

“Holding the rails while running on the treadmill actually affects the natural running posture and alignment,” says D’Wan Carpenter, DO, a board certified physical medicine and rehabilitation physician with SIMEDHealth in FLA.

“It decreases efficiency of the body due to the lax posture allowing the core abdominal and back muscles to relax.

“This change in the natural alignment can also cause increased stress on other areas, and particularly places much of the body weight on the upper extremities, which are not designed to be able to effectively support the whole body.”

How to Solve the Unsteadiness Problem

The chubby man was afraid of losing his footing. I told him, “Set the speed at 4 mph and tell me if you feel unsteady.”

He began jogging, without holding on, at 4 mph, and was able to keep his balance just fine.

He also felt that he was getting a better aerobic workout than he had been getting at 6 mph and holding onto the rails.

Look at the woman in the photo above. Does this in any way simulate outdoor jogging?

Even a light handhold on the rails will compromise effectiveness. The type of hold doesn’t matter — be it palms only; wrapping the fingers around the rail; pressing only the fingers to the rail; bent arms; straight arms — this will create a fake jogging experience that will hold you back from progress.

When a person runs or jogs naturally, arms swinging, their core (the soft structures of the low back and abdominal region) works to coordinate the movement between the lower and upper body.

You may not feel this core engagement, but it’s there. That’s why competitive sprinters and even longer-distance specialists (400m, 800m, even 1,500m) have great abs!

Nobody rocks a six-pack like a sprinter! Think that’s from thousands of crunches? Think again. It’s from running! Note the abs of soccer players or any athlete who does a lot of running.

When you hold onto the side rails (or anywhere else) of a treadmill while running…you cancel out abdominal and low back engagement, plus short-change leg involvement. 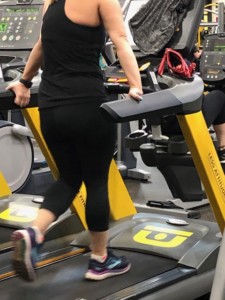 What in the heck kind of jogging form is THIS? Don’t say it’s better than a sofa workout. If you have to compare this deranged form to sitting on a sofa in order to validate it, then you just made a comparison to an extremely low standard!

The abs and low back get a free ride when you hold on. If you’ve been jogging 5, 6 or 7 mph on a treadmill and holding on…and doing no outside running…and then one day you go outside to do some running…the fatigue will begin biting at you very quickly because your body won’t be used to running without holding onto anything for support.

What makes this habit even worse is when someone presses UP on the side rails while running. This literally subtracts body weight off the tread.

I’ve witnessed this to the extreme: an “air jog.” What are people thinking when they do this?

Their arms are locked straight, shoulders scrunched up, as they keep their feet partially lifted off the tread as they air jog.

“Holding the rails also decreases the amount of weight bearing and reduces the number of calories burned during the exercise,” says Dr. Carpenter.

The calorie readout is generated by the selected speed and incline, regardless of what the user is doing.

Set the machine to a slower speed and let go.

See if you truly fly off or topple backwards.

If you’re apprehensive, set the speed to 3 mph and trot it.

Gradually increase the speed as you adjust.

If you normally “run” at 6 mph and say, a 10 percent incline…while holding on…you’ll have to drastically reduce these settings in order to let go. 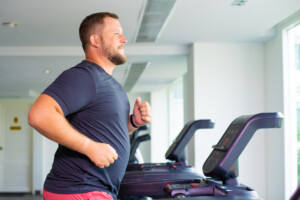 Trust me: A 2 mph trot at 10 percent incline will get your heart going, and you’ll feel your calves working like you’ve never felt before (holding on removes significant workload from the legs).

Experiment with different settings to find a sweet spot range…without holding on.

If dizziness is the issue, again, use a very slow speed at first and swing your arms.

Give your body a chance to overcome the dizziness.

If balance is the issue, again, go slow at first and give your body a chance to acquire better balance.

It will never learn to balance if you hold on.

A person who can deftly run down the street after a loose dog, chase their children in a park or run like the wind in a parking lot after a blowing $50 bill, did not pick up these skills by holding onto a treadmill.