How Common Is Phantosmia: Smelling Something that’s Not There? 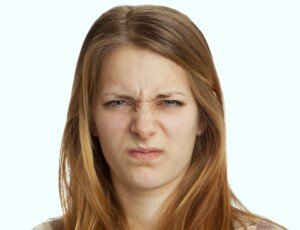 If you’ve been smelling things that aren’t there (phantosmia), you’re in good company: lots of it.

Phantosmia is also far more common in people over the age of 40, says a study.

According to the study, which was published in a 2018 JAMA Otolaryngology-Head and Neck Surgery, one in 15 Americans experience this sometimes very alarming phenomenon.

The study used data from over 7,400 participants at least age 40, from the 2011-2014 National Health and Nutrition Examination Survey (NHANES).

Phantosmia is not to be confused with parosmia. Parosmia is smelling something that IS there, but the sense of the odor is impaired.

The NHANES survey question asked if people sometimes would smell something bad, unpleasant or burning when no source of the odor could be found.

The paper points out that the ability to identify actual existing odors declines as we age. However, smelling something that’s not there becomes more common as people get older.

The JAMA paper also notes a previous study from Sweden that showed 4.9 percent of people over 60 experienced phantosmia.

The study suggests that phantosmia overall isn’t all that uncommon. But how common — or uncommon — is it when the cause is a medical situation?

After all, the detection of an odor that “isn’t there” may actually BE there — but just undiscovered.

For instance, suppose you start smelling pipe smoke, but nobody in your home uses tobacco. The smell comes and goes. Nobody outside your window is smoking a pipe when this happens.

This may make you start thinking you have a problem with your nose or brain.

However, you ultimately find the cause: Your new neighbor smokes a pipe, and the smoke is making its way into your home via the air vents that join your townhome to his!

Your neighbor could just as easily use scented candles, and that aroma would make it into your home: “I smell something sweet yet burning but nothing’s there.”

I once suddenly smelled cigarette smoke while driving. I then saw the driver ahead of me stick his arm out the window; in his hand was a cigarette.

But what if you don’t see the driver stick a cigarette out the window? You might conclude you have a medical phantosmia.

But as for a medical cause?

“In my experience it’s rare for someone to present just with this symptom only,” says Dr. David Beatty, MD, a retired general practitioner with 30+ years of experience and an instructor of general medicine for 20 years.

“People will often get an abnormal smell when it’s associated with other illness.

“Someone with chronic sinusitis, nasal congestion, nasal allergy or nasal polyps will often complain of abnormal smell or taste; but it’s usually obvious what the cause is.

“I can think of three cases where the person presented with just an unusual smell which wasn’t actually there.

“One was getting a pleasant smell like fresh baking, with no other symptoms. This person was eventually found to have a brain tumor.

“The second thought they were smelling horrible fumes which weren’t present.

“This person was sure the neighbor was causing the smell and was convinced the fumes were real, even though no one else could smell them.

“Paranoia seemed like the most likely diagnosis initially; however, she was found to have a badly blocked sinus. When the sinus was treated the smell went.

“The third case had a piece of cotton wool high in his nostril. This was blocking the sinus, and there was a huge buildup of pus behind the cotton wool. He had no recollection of ever putting cotton wool in his nose.

“The UK NICE (National Institute for Clinical Excellence) guidelines say: ‘Be aware that sudden onset distortion of smell or taste in adults is rarely associated with structural abnormality and usually resolves within a few months.’”

Dr. Beatty also points out that NICE advises adults with transient phantosmia to undergo a neurological assessment for epilepsy.

David Poulad, MD, a neurosurgeon, explains how a brain tumor can cause smelling something bad that’s not there.