The Different Phantom Smells that a Brain Tumor Can Cause 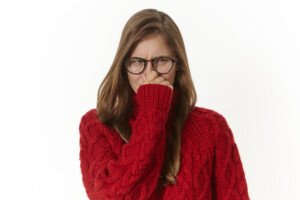 Smelling something that isn’t there (phantosmia) can be caused by a brain tumor.

There are different kinds of odors that a person may smell as a result of a brain tumor.

When a person begins smelling something that doesn’t exist (and it may take a while for them to realize this), they usually assume it’s a problem with their nose.

And in fact, it could very well be a sinus related issue, such as a polyp in the nasal cavity.

However, when one smells something that doesn’t exist – an imaginary odor (phantosmia) – this can have a far more serious cause.

A Mass in the Brain

“Phantosmia is also known as an olfactory hallucination – someone smells something that is not there.

“Brain tumors can directly cause this by injuring any structures involved with the olfactory system.

“Alternately, brain tumors can also indirectly cause phantosmia by leading to possible seizures and strokes.”

What kind of phantom odors can a brain tumor cause?

Dr. Sathi explains, “People often report that the odor is unpleasant, such as burning, rotten or moldy smells.

“However, symptoms are subjective and can vary from person to person.”

This means it’s possible for the phantom smell to be not all that bad. But don’t let that fool you.

At the same time, try to keep things in perspective. The vast majority of phantosmia cases are NOT a brain tumor.

The seemingly imagined odor may also be real – if you look hard enough for it.

For example, the scent of your neighbor’s strong solid air freshener may actually be making its way into your unit via a shared venting system.

The cigarette smoke that you sometimes smell may be actual smoke coming through an open window as a neighbor walks by outside with his cigarette.