Brain Tumor Can Cause Smelling Something Bad that’s Not There 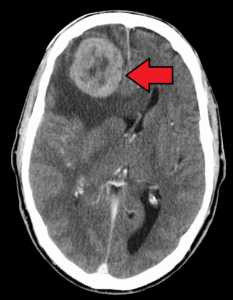 One possible cause of smelling something bad that’s not there is a brain tumor.

The brain tumor causes seizure activity that leads to smelling odors that have no outside source.

“Phantom smells are also known as olfactory hallucinations (phantosmia),” says David Poulad, MD, a board certified neurosurgeon with IGEA Brain & Spine who practices in Union, NJ, whose special interests include the surgical treatment of brain tumors.

Other than a Brain Tumor

• It “can be associated with temporal lobe epilepsy or other lesions in the temporal lobe that can cause a seizure,” says Dr. Poulad.

But smelling something that isn’t there “can be caused by a brain tumor,” says Dr. Poulad.

How does a brain tumor cause phantom odors?
Dr. Poulad explains, “When phantom smells are caused by a brain tumor, it is often due to seizure activity caused by the tumor.

“Not all seizures involve jerking/involuntary movements. In fact, olfactory hallucinations are quite common” in patients who have brain cancer.”

What are these phantom smells like?
“This varies from patient to patient,” says Dr. Poulad. “Most commonly people will describe the smell of burning tires or something smelling rotten/foul. It is very often an unpleasant smell.”

Being that phantom odors can have a non-cancerous cause, what are the odds that a person’s phantosmia is actually being caused by a tumor in the brain?

“Brain tumors are probably the least likely among the causes for phantom smells, since statistically they are much less likely to occur in the population, e.g., there is a smaller incidence of BTs than there is for upper respiratory tract infections, migraines, traumatic brain injury.”

If you’ve noticed some phantosmia lately, do not panic and jump to scary conclusions.

First find out if there’s a pattern. Do you experience this only in certain locations, like inside your car?

Or perhaps it’s only at work or at your grandmother’s house? If you’re sure that the common theme is location, then find out what it is about that location that can be generating the odor.

If there is no common denominator, keep in mind that there are yet even more possible causes for phantosmia, which is also known as parosmia, says Dr. Jordan S. Josephson, an ear, nose and throat physician, director of the New York Nasal and Sinus Center and author of “Sinus Relief Now”:

• Chemical damage to the olfactory nerve of the nose

• Infection of the olfactory nerve or sinuses

• Trauma to the olfactory nerve

• The infection itself can cause phantosmia.

• And last but not least, a tumor on the olfactory nerve

So smelling something bad that isn’t there has numerous possible causes, but a brain (or olfactory nerve) tumor is NOT one of the more likely causes! Read more about what Dr. Josephson says.