Can One Pupil More Dilated Mean a Brain Tumor?

A brain tumor can cause one pupil to be bigger or more dilated than the other.

But so can less serious conditions including totally benign.

Not just Brain Tumor, but Aneurysm Can Make Pupils Unequal

“The third cranial nerve is a nerve that comes out of the brainstem (midbrain) and travels to the eye to constrict the pupil,” says Kaushal M. Kulkarni, MD, board certified ophthalmologist and neuro-ophthalmologist in private practice in New York.

“A dilated pupil on one side could be a sign of third nerve damage,” continues Dr. Kulkarni.

“There are many causes of third nerve damage, but the most worrisome is compression from a brain tumor, aneurysm or swelling in the brain.”

One type of brain tumor that can press up against (though not invade) the brainstem is called acoustic neuroma, though the location of this growth would not directly involve the third cranial nerve — and hence, would not dilate a pupil via that route. 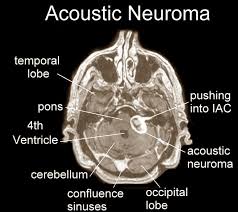 Howver, this slow growing brain tumor can indirectly lead to third nerve damage by pressing against the brainstem, leading to one pupil becoming dilated.

It may also interfere with the brainstem’s commands to make the heart beat.

First off, this rare brain tumor will cause other symptoms long before it encroaches upon the brainstem.

These symptoms are typically tinnitus (hissing, buzzing or a high frequency tone in one ear) and hearing loss in that ear.

You would surely have seen a doctor and had this brain tumor treated well before it began pressing upon the brainstem.

Second, an acoustic neuroma is 1) very slow growing, 2) benign, and 3) often discovered by accident when the head is imaged for an unrelated reason.

If this brain tumor, which begins in the inner ear canal, is small and not causing symptoms, the only treatment is serial imaging to track its slow growth.

Nevertheless, malignant brain tumors can end up infiltrating the brainstem and, among other symptoms, cause one pupil to be bigger than the other.

“Can” is the key word. Unequal pupil size is an uncommon symptom of cancer in the brain.

A brain tumor may be primary or a metastasis from a distant primary site, such as breast cancer, pancreatic cancer or melanoma.

If a brain tumor is causing unequal pupil size, there’s a very good chance you’ll have other symptoms such as partial facial paralysis, gait problems, weakness in a limb and speech issues, among others.

Is one of your pupils bigger than the other, but you have NO other symptoms? It’s extremely unlikely that a brain tumor is the cause.

“If there are any other symptoms in addition to the dilated pupil, such as double vision, eyelid drooping or change in mental status, this is an emergency,” says Dr. Kulkarni.

The triad of 1) one pupil dilated, 2) double vision, and 3) drooping eyelid (ptosis) is HIGHLY suspect for a brain aneurysm that’s about to rupture.

If a bad or non-retractable headache accompanies the triad, this makes the diagnosis even more likely – as in, VERY likely. Get to the emergency room!

“However, an isolated dilated pupil on one side without any other symptoms is not always an emergency and could be due to other causes such as getting chemicals in the eye (such as drops that dilate the eye, plant fertilizer or medication for motion sickness), trauma to the eye, previous eye surgery or degeneration of the iris nerves or muscles (Adies tonic pupil),” explains Dr. Kulkarni.

Furthermore, benign unequal pupil size is somewhat common in the general population, occurring naturally, and it may come and go, and alternate eyes.

This is called physiologic anisocoria.

But with this natural harmless asymmetry, the unequal pupil size is sometimes very mild and may be perceptible to only the person who has it.

It’s not always something that will likely be noticed incidentally while you’re brushing your hair before a mirror – unless you’re looking for it, and even then, you may not notice it unless you’re close to the mirror.

You may not even notice it while putting in contact lenses, applying makeup or plucking your eyebrows – unless, again, you’re looking for it. But in some cases it can be more obvious.

It’s just that one day, you might just happen to notice that one pupil is more dilated (but only a tiny bit) than the other.

If you have health anxiety you’ll be prone to thinking it might be a brain tumor.

Dr. Kulkarni has a special interest in optic nerve regeneration.