Can Aneurysm Cause One Pupil to Be More Dilated than the Other? 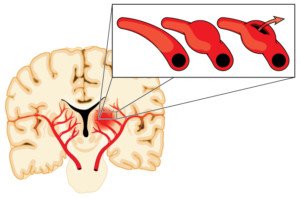 If one pupil is dilated this CAN be from an aneurysm.

One dilated pupil usually represents a recent change in the aneurysm or possible small sentinel (early warning) bleed. In the case of bleeding, usually there is associated sudden onset headache.

Most medical sites will list “dilated pupils” as a possible symptom of an aneurysm.

However, when only one pupil is dilated in a person, this is far more concerning than when both are.

When only one pupil is dilated, or unilateral dilation, this is called anisocoria.

Pupils of uneven size may also a benign finding and in this case is called physiological anisocoria.

“Physiological anisocoria is a common finding that can occur in approximately 20 percent of the normal population,” says Farhan Siddiq, MD, a neurosurgeon with University of Missouri Health Care.

“Typically, the difference in pupil diameters is less than 1.0 mm and may vary from day to day,” says Dr. Siddiq.

“Aneurysms can also cause anisocoria, particularly in a location known as the posterior communicating artery or PCOM.”

“Usually this dilatation is painless, but pain could be associated with it, indicating a possible recent rupture of the aneurysm.

“The pupillary dilatation is not a variable but may still be responsive to light. There may or may not be double vision associated.

“Any sudden change in the size of the pupil on a previously normal individual should raise suspicion.

“Interestingly, diabetes can also cause these symptoms, so urgent tests are required to rule out a ruptured PCOM aneurysm.”

As frightening as this may sound, there is no reason to obsess over the size of your pupils by frequently inspecting them in magnifying mirrors.

Nevertheless, it’s always a smart idea to be informed. People have suffered from ruptured aneurysms because they ignored the warning signs.

“Anisocoria, or unequal pupil size, may be an early sign of an impending neurologic emergency and often suggestive of a life threatening condition affecting cranial nerve function, such as tumour compression, intracranial hypertension with impending uncal herniation, expanding intracranial aneurysm, or haemorrhage,” says a paper in the Indian Journal of Anaesthesia (July/August 2010, Yalcin et al).

Symptoms that an Unruptured Aneurysm May Cause

• Pain above and behind an eye
• A dilated pupil
• Change in vision
• Numbness, weakness or paralysis of one side of the face
• Drooping eyelid (ptosis)

Note the word “A” before “dilated.” This means one pupil – which means pupils of unequal size.

Other symptoms that are present, plus recent medical history, are crucial in the determination of how to proceed with a patient who presents with unequal pupil size.