Can a Teenager Get Melanoma in the Mouth? 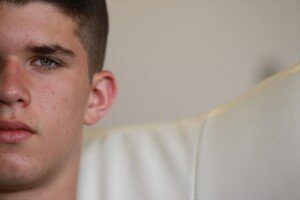 The answer is “Yes” to the question, Can a teen get melanoma of the mouth.

The most highly publicized presentation of melanoma is that of a “mole” on the skin.

However, melanoma can arise in areas hidden from the sun, such as between the toes, the soles of the feet, inside the eye and inside the mouth.

“They absolutely can — pediatric melanoma is a real issue,” says Bobby Buka, MD, a NYC dermatologist and CEO of The Dermatology Specialists, and author of “Buka’s Emergencies in Dermatology” and “Top 50 Dermatology Case Studies for Primary Care.”

Dr. Buka explains, “While onset rates are lower than that of adults, melanomas in young people follow all the same rules of their adult counterparts — any irregularly bordered, rapidly changing lesion should be looked at by a dermatologist.

“They do occasionally arise in the mouth, and should be treated with the same urgency as those found anywhere else on the body.”

Teen Girl Had Melanoma Inside Her Mouth

Archives of Pathology & Laboratory Medicine (D’Silva et al, Sept. 2002) details the case of a teen girl who presented with melanoma inside her mouth.

Age 17, she reported to her dentist pain and swelling in the upper jaw. When probed, the lesion bled. The exam led to a biopsy – with the diagnosis of mucosal melanoma.

Less than two percent of all melanomas are of the mucosal type. And 55 percent of these develop in the head and neck.

How rare is melanoma of the mouth?
It comes in at only 1.2 cases per 10 million people per year. This statistic encompasses all ages.

Since any melanoma is extraordinarily rare in teens, you can imagine just how rare oral melanoma would be among this age group.

Of the very tiny number of people who do get melanoma in the mouth, it’s more common in males and between the ages of 22 and 83, with an average age of 56.

• Pain and ulceration, sometimes bleeding
• Loose teeth
• Bone erosion
• The cancer may arise in the hard or soft palate or gums.
• Tend to grow vertically (deeper into the tissue)
• Average five year survival rate is 15 percent.

More About the Teen with Melanoma Inside Her Mouth

Melanoma is certainly not on the radar in teenagers who may be more worried about a new pimple, bad hair day or the latest broken nail.

The 17-year-old had symptoms for three or four months before seeing a dentist.

The dentist referred the young patient to an oral and maxillofacial surgeon who ordered the biopsy.

The cancer was surgically removed. Imaging revealed no signs of spread. The patient had no family history of such a cancer.

Super Super Rare
Four cases of pediatric oral melanoma have been described in the medical literature as of 2002.

“In general, oral melanoma is an extremely rare lesion that accounts for 0.05% of malignant oral tumors,” says the Archives of Pathology & Laboratory Medicine paper.

The populations most commonly affected are black Africans, Native Americans, Hispanics and Japanese.