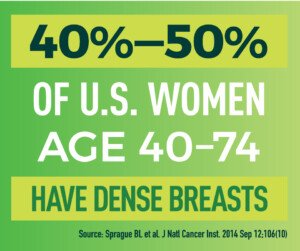 A blood test may be remarkably superior to mammography for ruling out cancer in dense breast tissue.

The problem with mammography is that its sensitivity to detecting masses that are suspicious for malignancy is reduced when dense breasts are being imaged.

Dense breast tissue appears white on the mammogram. But so do malignant tumors. Cancerous masses can be obscured by the white of the benign fibrocystic tissue.

Hence, a false negative finding may occur – at a greater rate than what is normally expected to occur when fatty breasts are imaged.

A study involving the Videssa® Breast blood test demonstrated a negative predictive value of over 99 percent.

This means that the blood test was able to rule out breast cancer with greater than a 99 percent accuracy in the study participants.

The study appears in PLOS ONE (Oct. 2017) and involved 545 women 25 to 50 who were grouped into those who had dense tissue and those who did not.

They all had a BIRAD mammography rating of either 3 (probably benign) or 4 (suspicious abnormality).

The negative predictive value was 99.3 percent and 99.1 percent for the non-dense and dense groups, respectively.

Videssa® Breast has the potential to reduce the use of biopsy by up to 67 percent, says a study in Clinical Breast Cancer that was published earlier this year.

Videssa® Breast is available currently and being used by some healthcare providers for women who have abnormal mammography results.