Mole Removed Long Ago, Area Healed, but Now Is Itching 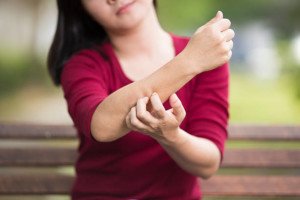 A mole gets removed, then a long time later it starts itching like mad.

One woman feared this meant a few mole cells were left behind and turned into cancer.

And that the cancer was causing the itching.

So what’s really going on when the area where a mole was removed begins itching a long time later?

“A mole removed many years ago, and diagnosed by a pathology report as a normal mole, is rarely a concern,” continues Dr. Williams.

“If there is clearly regrowth of the mole, with brown pigment appearing in the scar or around the scar, it should be checked.

“But often moles do regrow since they are removed only partially and roots are left behind.

“If there is nothing to see, and just the symptom of itch, there is no need to re-biopsy right away.

“If the itching continues unexplained and brown pigment appears, it should be evaluated again.”

If you have many moles and find it grueling to inspect every one of them every month for signs of cancer, and you’re thinking of having some pre-emptively removed, there’s a better alternative:

It’s one thing to have a mole removed for cosmetic reasons, but “de-moling” a bunch of moles out of fear of melanoma is not the way to go.

With SDD, all the patient’s moles are “mapped” photographically and fed into a computer database where they are rated on a suspicion index for melanoma.

Every year the same moles are photographed. The computer as well as the doctor’s naked-eye scrutiny of the magnified images of the moles on the computer screen make a comparison to past images to detect any changes.