What Causes Angina Threshold to Change During Exercise? 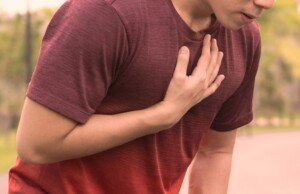 Here are two explanations for what can cause angina threshold to change during exercise or physical activity.

But the chest pain can also be caused by spasms of the coronary arteries. This situation is referred to angina as well, and in these latter cases, the arteries may be quite clear.

Two patients with a change in angina threshold during exercise were studied.

In the first patient there were temporary changes in the S-T segment (as shown on EKG) that caused spontaneous chest pain.

The patient underwent a test that confirmed a condition involving spasm of a major coronary artery.

The second patient’s EKG showed a different kind of S-T change, and the same test revealed a condition of a major coronary arterial spasm.

Conclusion: When the angina threshold changes during exercise, this is explained in some cases by coronary artery spasm and is called vasospastic angina. It has nothing to do with plaque buildup.

Angina threshold was measured by an ergometer for the bike and then a procedure called atrial pacing (involves placement of electrodes).

After the subjects had developed aerobic conditioning, the “product of heart rate and arterial systolic blood pressure at the exercise angina threshold was higher,” says the report.

This indicates that the endurance training “increased the maximum myocardial O2 supply during exercise.”

However, the study points out that when the angina was triggered by atrial pacing, the heart rate and arterial blood pressure, along with coronary blood flow and myocardial O2 consumption at the angina threshold, came out to be the same—before and after the endurance conditioning.

Conclusion: The increase in exercise angina threshold was apparently due to a functional adaptation.

This originated either from the myocardial O2 supply or the relationship between the bodily blood flow and myocardial O2 consumption.

To put this more simply, the change in angina threshold resulted from the exercise only, not the induced stress from the atrial pacing.

A third explanation for an increase in angina threshold could be attributed to the delayed vasodilation of collateral vessels – and in English, this means delayed assistance by helpful vessels.

In some cases of coronary heart disease, collateral or accessory coronary arteries develop.

They help out with the clogged arteries that struggle to deliver enough oxygen to the heart.

When someone with severe heart disease experiences angina at the initial onset of exercise, but then it goes away despite the continuation of exercise, this “is likely to be secondary to a delayed vasodilation of collateral vessels,” says a study in Cardiology (1986).